In previous years, throngs of tourists flocked to Antoni Gaudí’s masterpiece Sagrada Família basilica in Barcelona. But with hundreds of new outbreaks of the coronavirus in the northeast region of Catalonia, Spain's tourism industry is taking a serious hit.

People walk past the La Sagrada Família Basilica as the sun sets in Barcelona, Spain, July 30, 2020. Europe’s tourism revival is running into turbulence only weeks after countries reopened their borders, with rising infections in Spain and other nations causing increasing concern among health authorities over people bringing the coronavirus home from their summer vacations.

Barcelona’s Sagrada Família has never been this empty. On the pedestrian street in front of the world-famous basilica, children ride scooters, families take strolls and residents walk their dogs.

In previous years, hundreds of tourists flocked to Antoni Gaudí’s masterpiece and took photos. But as Spain experiences what some are calling a “possible second wave” of the coronavirus — the northeast region of Catalonia, which includes Barcelona, is an area with one of the highest numbers of cases — the country’s tourism industry has taken a serious hit.

“We wanted to take advantage since there aren’t many tourists,” said resident Francesc Guasch, who visits with his three sons, piling on top of each other on a skateboard and rolling down the hill. “We thought, let’s go see the Sagrada Família since even though we’re from here, we rarely come by.”

The family has spent more time than usual exploring the city, riding bikes through the empty Gothic Quarter and going to restaurants that are usually packed.

But Guasch is wary that fewer tourists have left many people without jobs and he worries about the economic fallout, especially since countries like the UK, Germany and France — who make up a large number of visitors to Spain — have discouraged travel here.

Spain was particularly hard-hit when the coronavirus first arrived in Europe in February – but after a strict, three-month lockdown that began in mid-March, the number of new cases was brought down to a trickle.

Since confinement measures lifted on June 21, however, people began to relax — and some tourists began to arrive.

In an attempt to contain the coronavirus, regional governments have implemented measures, like making it mandatory to wear masks in public spaces and banning meetings of more than 10 people.

“The situation is too critical not to be taken seriously,” Torra said in Catalan. “The increase in outbreaks is worrying.”

Related: In Spain after lockdown, soccer resumes for men — but not for women

But then he directed his speech toward international viewers, in English, saying the situation is being closely monitored.

“Catalonia is definitely a safe and friendly destination for national and international visitors alike,” he said.

Politicians often share these mixed messages as they try to salvage what’s left of this year’s tourist season, which stalled for months due to the pandemic but usually accounts for 12% of the country’s gross domestic product.

Earlier this week, Spain’s Prime Minister Pedro Sánchez responded to the UK’s decision to impose a mandatory quarantine for those returning from Spain by saying the measure is “unjust.” By contrast, Spain’s health emergency chief, Fernando Simón, said the measure is sensible, considering the situation. 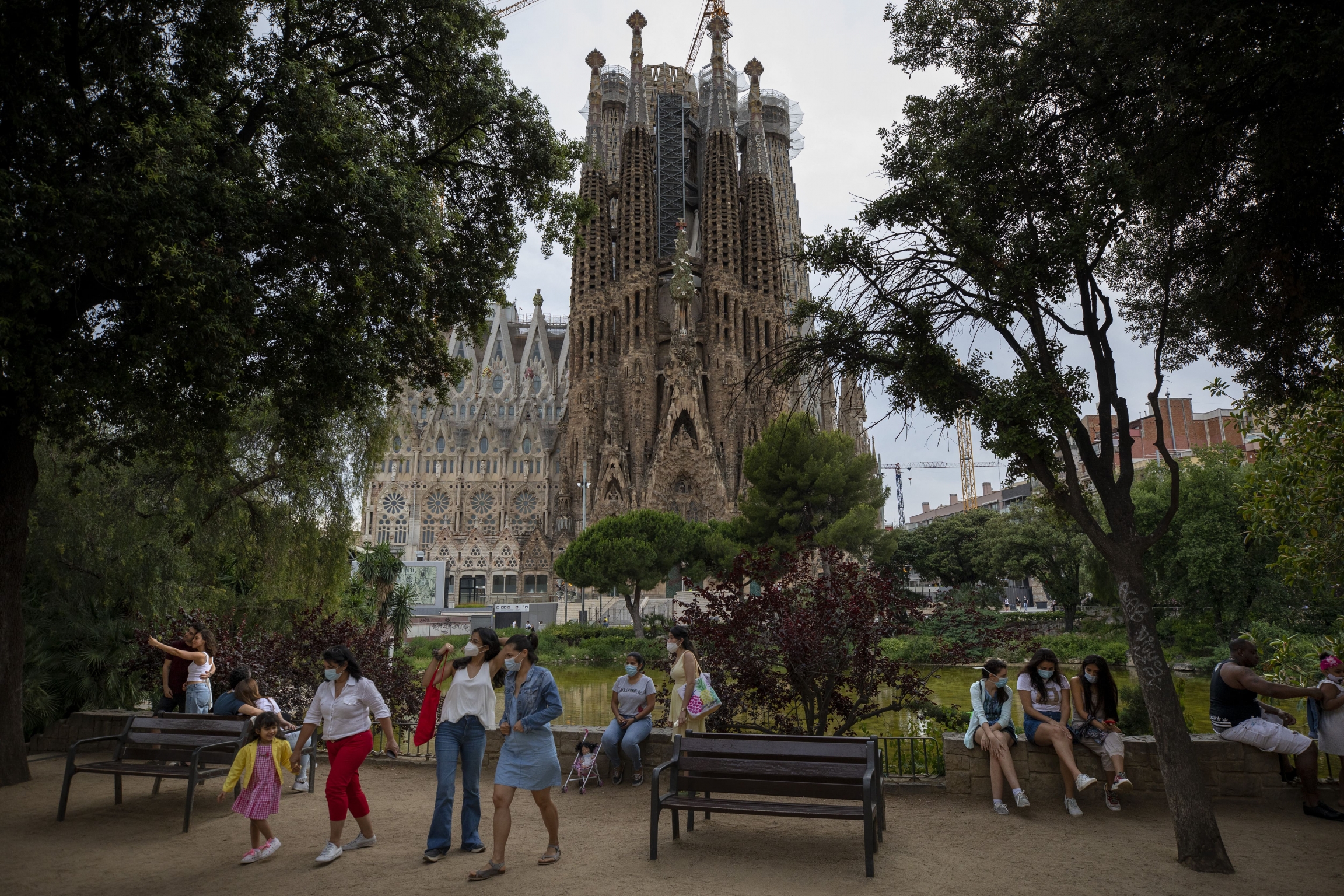 In this Sunday, May 31, 2020 file photo, local visitors enjoy a park next to the Antoni Gaudí’s La Sagrada Familia Basilica in Barcelona. Barcelona’s iconic La Sagrada Familia basilica has reopened its doors for visits exclusively for health workers after nearly four months being closed due to the coronavirus pandemic.

Back at the Sagrada Família, kids continue to enjoy the fairly empty streets. Roxana Arévalo visits with her son and takes photos of him in front of the basilica. Arévalo says what she worries most about when it comes to the recent cases of the coronavirus is the city’s nightlife.

“I feel bad because I realize this is probably what generates the most amount of money,” she said. “But, in this situation, the government should have waited longer to reopen [nightclubs]. That’s likely what has caused an increase in cases.”

Arévalo’s job wasn’t affected by the pandemic — she works in the cleaning department at a small air traffic control center in a city just outside Barcelona. But she is aware of the government’s financial support for laid-off workers and says it isn’t enough. She wants lawmakers to create more jobs — especially ones that are not tourism-dependent.

“It’s all connected,” Arévalo said. “Those who aren’t working can’t go on vacation, because they’re holding back, so they aren’t spending. I don’t know how we’ll make it to October or November, much less to Christmas. Right now, there’s economic movement because people are living off of their savings, but later on, I think we’ll be worse off than now.”