One of Belarus’ top diplomats has accused neighboring Poland and Lithuania of playing up the extent of a new spike in refugees desperately trying to cross the border into the EU to extort extra funds and resources from Brussels.

Valentin Rybakov, the country’s permanent representative at the United Nations, told Moscow’s RIA Novosti on Friday that the two nations “are just maximizing the use of the migrant situation in their own interests as a pretext to siphon additional funds from the EU.”

According to him, both Poland and Lithuania are exploiting the worsening row “to justify their anti-immigrant policy and their numerous violations of international obligations.” 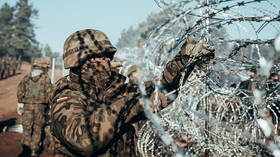 The standoff across the shared frontier has escalated this week, with Poland deploying thousands of border guards, police officers and soldiers to turn back crowds of would-be asylum seekers, mostly from the Middle East. Authorities deployed tear gas and used riot shields to prevent them from crossing the demarcation line.

The EU accuses Belarus of laying on flights from troubled nations like Iraq, Syria and Iran, encouraging migrants to attempt a new route into the EU. Once in the country, Brussels claims, they are transported to the border and prevented from turning back. Footage earlier this week appeared to show Belarusian officials blocking groups from reaching a border checkpoint where asylum applications could be processed, and pushing them to assault the barbed-wire fence instead. Russian media reported on Friday that at least one group has since made it through.

Minsk denies that the rise in attempted crossings is part of a “hybrid war” designed to put pressure on the EU over sanctions, insisting instead that it is the result of Western intervention in the Middle East. According to the country’s veteran leader Alexander Lukashenko, authorities are simply no longer prepared to prevent the migrants reaching Poland.

On Thursday, Latvian Defense Minister Artis Pabriks said that, if Lukashenko continues to escalate the situation, “I cannot rule out that even NATO could become involved, because we must defend our borders and will not open them.”

READ MORE: Russia comments on allegations of its involvement in migrant crisis on Belarus-Poland border

According to him, the crisis should strengthen the EU’s resolve to build fortified fences along the border with the Eastern European nation. In a broadside against the European Commission, he argued that officials were reacting “very slowly” to the standoff. “If a way to respond faster isn’t found, the people of Europe will take a much dimmer view of the future potential of the EU,” he went on.

Both Poland and Lithuania have begun building border walls to prevent crossings, and both have requested funds from Brussels to support construction.