Minsk may block gas transit to the European Union if more sanctions are imposed on Belarus, the country’s president Alexander Lukashenko threatened on Thursday. Brussels is currently discussing a fifth package of measures.

The Yamal-Europe transnational gas pipeline runs from Russia’s Yamal peninsula to Frankfurt-an-der-Oder in Germany, via Belarus and Poland. The Polish and German sections are owned by local companies, while energy giant Gazprom owns the Russian and Belarusian portions. 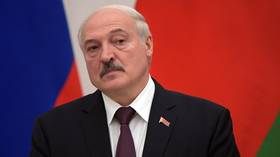 ‘I’m not a madman’: Lukashenko sticks to his stance on Polish border standoff

“We are heating Europe, and they are threatening us that they are going to close the border,” Lukashenko said, according to state media outlet BelTA. “What if we cut off the natural gas supply there? Therefore, I would recommend the leadership of Poland, Lithuania, and other heedless people to think before they speak.”

Lukashenko’s comments come as he stands accused by the EU of “weaponizing” migrants by flying them into his country and transporting them to the Polish frontier, allegedly as part of a “hybrid war” against the West. As things stand, thousands of migrants from the Middle East and North Africa currently sit trapped in no man’s land, waiting to be allowed across the border.

On Wednesday, British news agency Reuters reported that the EU is close to imposing a fifth round of sanctions on Belarus, which would target around 30 individuals and the national flag-carrying airline Belavia.

The previous four packages of economic measures have come since August 2020, when Lukashenko won what is believed by Brussels to be a rigged presidential election.

The threat to cut off gas comes at a time when prices in Europe have inflated due to the incoming winter cold, among other factors.