US President Joe Biden has vowed to hold lengthy talks with his Russian counterpart, Vladimir Putin, on the issue of Ukraine, but insists he will accept no warnings about “red lines” from Moscow.

“We’ve been aware of Russia’s actions [concerning Ukraine] for a long time and my expectation is we’re going to have a long discussion with Putin,” Biden said on Friday night as he left for Camp David.

“I don’t accept anybody’s red lines,” the president added in apparent reference to the position Moscow reasserted earlier this week as several Western publications suggested a military showdown in Ukraine was imminent. 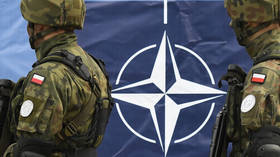 On Thursday, Russia’s Foreign Ministry again claimed NATO had given assurances it would not move “an inch” further east at the end of the Cold War. Despite that pledge, it has continued to expand, encompassing new member states ever closer to Russia’s borders, with Ukraine repeatedly having expressed an interest in joining the bloc in recent years.

The ministry stressed that “the only option for resolving the current situation” would be for NATO to rule out any further such expansion and to stop its ongoing military build-up on Moscow’s doorstep.

Last month, the Biden administration warned European officials that Russia could be mulling an “invasion” of Eastern Ukraine, with Secretary of State Antony Blinken threatening “serious consequences” in the event of any “aggression.”

Moscow has rejected those predictions as groundless, but has voiced concerns about internal conflict breaking out in Ukraine’s war-torn Donbass. Russia has accused the West of “encouraging” Ukraine to start an armed conflict by moving NATO military gear closer to the border.

Foreign Minister Sergey Lavrov also claimed Ukrainian forces have been using US-made rockets as they battle separatists in the east of the country, arguing that the alleged US assistance only increases the chances of a full-blown civil war being precipitated.