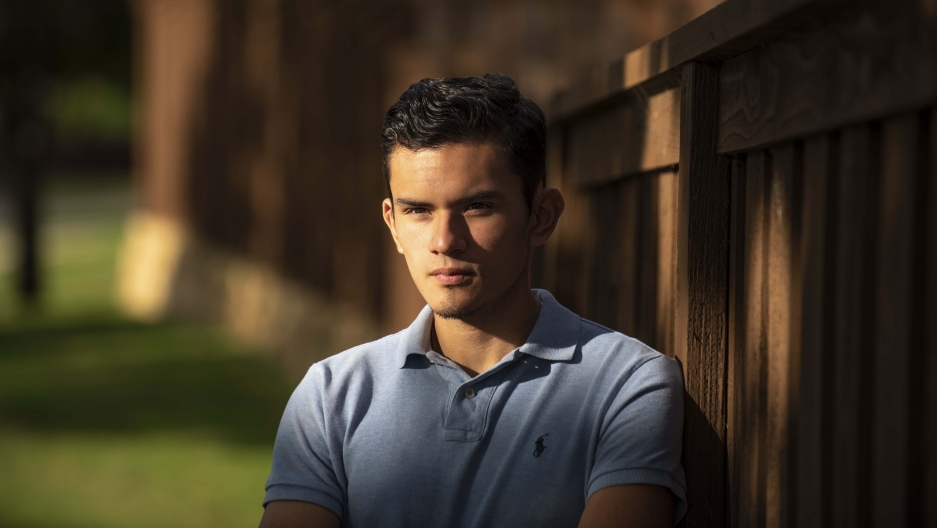 Izcan Ordaz, an 18-year-old high school graduate in Fort Worth, Texas, will vote in his first US presidential election this November.

This story is part of “Every 30 Seconds,” a collaborative public media reporting project tracing the young Latino electorate leading up to the 2020 presidential election and beyond.

A few weeks ago, 18-year-old Izcan Ordaz joined his high school classmates for his first protest. They called for racial justice as part of a national wave of Black Lives Matter activism. A few days later, he marched again in Keller, an affluent suburb of Fort Worth, Texas, not usually known for protests.

But similar to many places across the country, residents turned out in larger numbers than expected. Keller police estimated 3,000 people showed up.

“I really assumed it was just going to be mostly young people, mostly a lot of minorities,” Ordaz said. “But when I got there I found that it was predominantly white Americans and lots of older families, lots of children.” 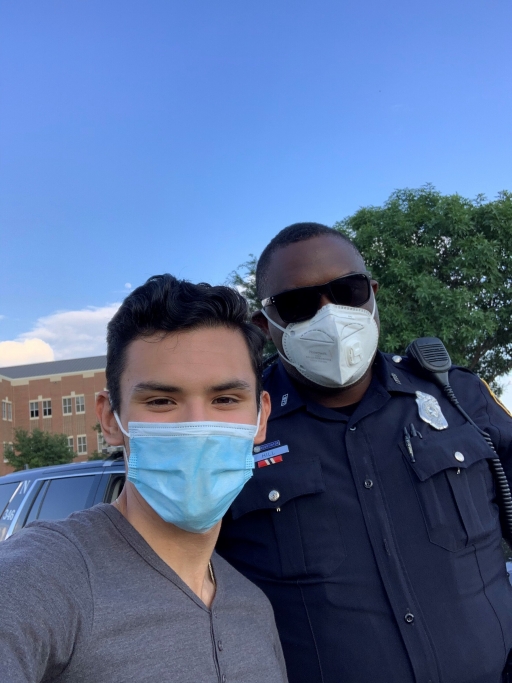 Izcan Ordaz, left, poses with a Fort Worth, Texas, police officer at a recent Black Lives Matter protest near his high school.

Ordaz, who recently graduated from Central High School in Fort Worth, will vote in his first presidential election this November. He falls somewhere in the middle of the US political spectrum: more conservative than his parents, but not too far to the right. Ordaz believes in capitalism and a free-market economy. And two major recent events — the coronavirus pandemic and Black Lives Matter protests — are shaking up how he views US politics.

Back in April, Ordaz’s biggest concerns were getting through the pandemic, the state of the US economy and finishing high school virtually.

Related: This Latino teen voter worries about prom, graduation — and the economy

Now, the issue of racial justice is also top of mind. Ordaz said he felt compelled to do something after watching the viral video of a white Minnesota police officer press his knee into the neck of George Floyd, a Black man.

What happened to Floyd wasn’t right and was painful to watch, Ordaz said. Floyd’s death reflects a larger problem of racial injustice in the country, he added — and that’s why he’s speaking up.

As a young Latino, Ordaz is part of a demographic that is changing the US — politically, culturally and demographically. Approximately every 30 seconds, a Latino in the US turns 18 and becomes eligible to vote. Latinos’ sheer numbers make them an important voting bloc: This fall, they could surpass Black voters for the first time, making them the largest racial or ethnic voter group after whites, according to the Pew Research Center.

Related: Every 30 seconds, a young Latino in the US turns 18. Their votes count more than ever.

Ordaz said it’s his generation’s responsibility to not commit the same mistakes made by previous generations. While he credits older generations for paving the way in the fight for racial equality, he believes his generation can do more.

He points to high-profile cases, such as the 1992 protests that erupted in Los Angeles after four police officers who were videotaped beating Black motorist Rodney King were acquitted at trial.

“This police brutality has been a recurring issue in the United States that hopefully by the time we get to our parents’ age will not still be an issue,” Ordaz said.

Max Krochmal, an associate history professor of history at Texas Christian University in Fort Worth, said it’s promising to see a new wave of activism around racial justice, which has taken cues from the 1960s civil rights movement.

That movement pushed the country as far as white Americans were willing to go, said Krochmal, who also chairs comparative race and ethnic studies at the university. In the ’60s, Black activists marched and demanded equal rights. They won access to public accommodations, such as restaurants and movie theaters. And the Voting Rights Act of 1965 was passed and signed into law by President Lyndon B. Johnson.

Other changes around racial equality occurred in the 1960s, but the movement eventually plateaued, Krochmal said. And in some ways, he feels like the nation has moved backward.

“So I see the current Black Lives Matter movement as picking up that torch, as saying that the things that the nation identified that were wrong in the wake of the last wave of urban rebellions are still wrong.”

“So, I see the current Black Lives Matter movement as picking up that torch, as saying that the things that the nation identified that were wrong in the wake of the last wave of urban rebellions are still wrong,” Krochmal said. “And indeed, sometimes they’re worse, and that the nation needs to come to grips with that.”

Krochmal said the country still needs to deal with underlying issues such as racialized economic inequality, police brutality and the lack of adequate political representation.

There is hope, though.

“What we’re seeing right now that I think is amazing and remarkable is that young people … are out on the streets for the first time ever,” Krochmal said. “I think most of the time, students feel alienated from that history, but right now there’s a sense among them that they’re out doing it, that they are themselves making history and they’re empowered and they’re emboldened and they believe in the capacity for change. They’re incredibly optimistic.”

Ordaz feels that, too. He believes his peers are more tolerant and accepting of others. He uses his first name as an example of that tolerance: “Izcan” comes from the Aztec language Nahuatl and means “behold.”  He says he used to feel self-conscious about it — but at school, he’s gotten compliments on it.

“The bottom line is that Gen Z as a whole does not agree with racism. It is not a political issue.”

“The bottom line is that Gen Z as a whole does not agree with racism,” Ordaz said. “It is not a political issue. Typically, the things that I see on the media or even in person, young people are normally the ones who stand against racism when it happens from older generations.”

Ordaz’s mother, Xochitl Ortiz, said she’s proud of her son for standing up for issues he believes in. She reflected on that while sitting outside her home one recent evening.

“My husband and I are just amazed that he’s able to articulate and just really see at his young age, just the ideas that he has,” she said.

Discussion: The Latino conservative vote in the 2020 election 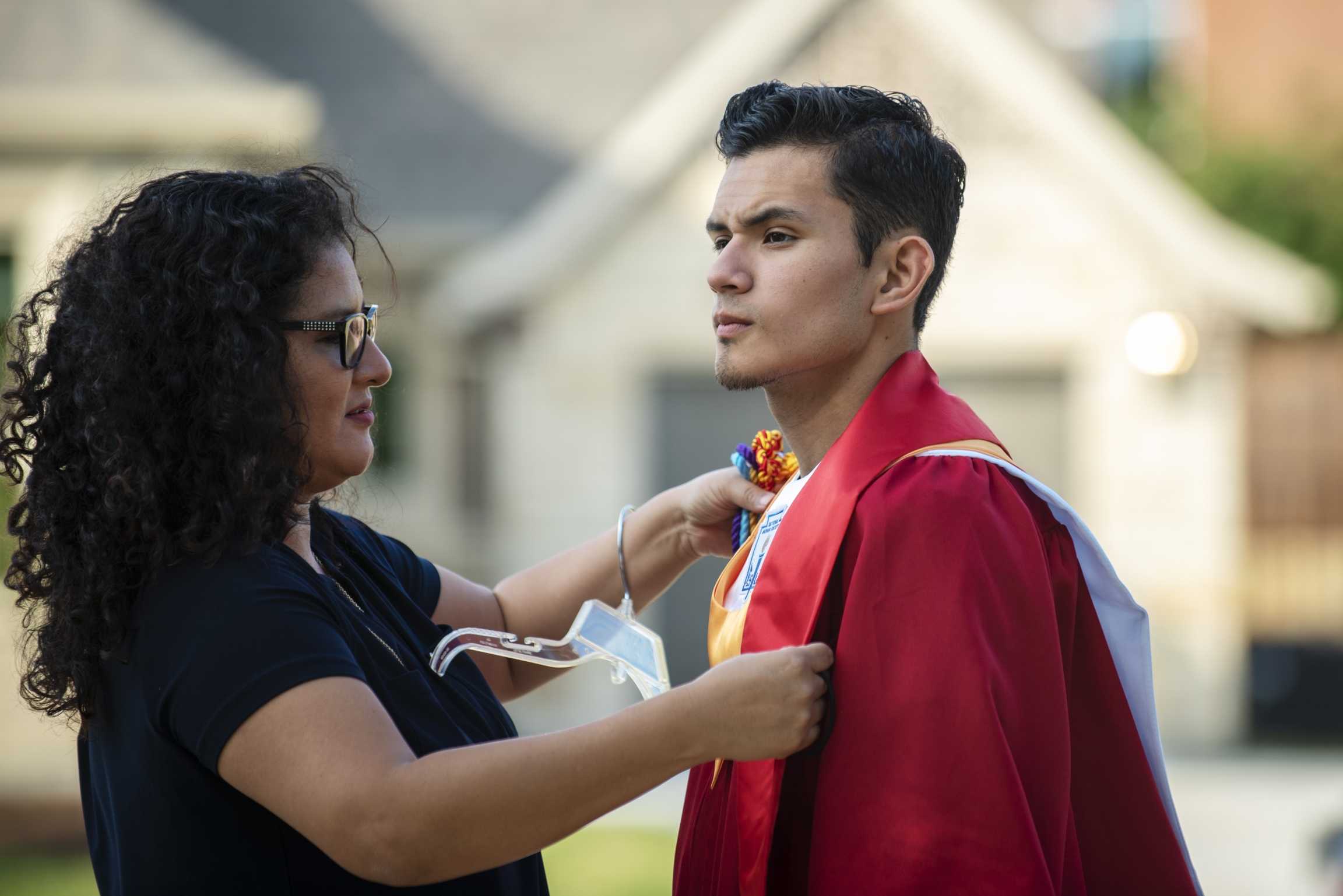 Xochitl Ortiz, left, helps her son Izcan Ordaz to try on his graduation gown outside their home in Keller, Texas, May 28, 2020. Ordaz graduated last week.

Ortiz and her husband don’t shy away from talking with their son about difficult topics, such as racial disparities, discrimination and the history of slavery.

And she accepts that sometimes they may have different views.

“It’s just really neat to see how he takes in information and doesn’t just quickly jump to make a decision but really kind of investigates,” she said.

Just what impact this new movement will have on the ballot box in November remains to be seen. Krochmal said he’s noticed alliances forming between grassroots protest groups and those working toward making political changes.

“What we’re witnessing is grassroots organizing in the electoral arena among people who ordinarily don’t participate in that and we’re seeing folks paying attention to local politics, particularly local politics, who’ve never noticed it before,” he said.

As for Ordaz, he said he still plans to vote for former Vice President Joe Biden. He’s critical of how President Donald Trump has politicized the coronavirus pandemic, and Ordaz doesn’t like the comments he’s made about Black Lives Matter protesters. He believes the president’s actions have polarized the country.

He said: “I personally feel that the role of any leader anywhere, anytime should always be to try to create some kind of unity with the people he’s hoping to lead.”