The threat of “irreversible destabilization” is growing in Russia, but the country should be careful not to set up risky “liberal experiments” that could easily fail, former presidential adviser Vladislav Surkov has claimed.

In an article for the online publication Actual Comment, Surkov used the analogy of entropy to describe how chaos increases in a closed system. According to him, a strong state is necessary to restrain what he dubbed as ‘social entropy’.

The former key official, once dubbed the Kremlin’s ‘grey cardinal’, held the post of assistant to the president until February 2020 and has served under Putin in various capacities since 1999. His time in the Kremlin is best remembered by the cottage industry it spawned in the West, in which foreign commentators often characterized him as the brains behind the entire operation. He is also often described as one of Putinism’s founding fathers, with some portraying him as responsible for the idea that the security state should come above individual freedoms. 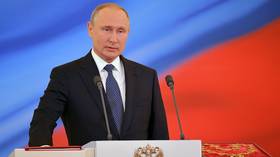 According to Surkov, the first twenty years of the 21st century have seen stability be successfully maintained, following the social chaos of the 1990s, pulling “the traumatized country out from under the rubble of perestroika.”

“These years will surely be remembered one day as a golden age,” Surkov said.

However, sooner or later, the country will see more and more chaos as the state fails to deal with the “much-maligned desires” of citizens. However, Surkov warned that the Russian state should not attempt to deal with growing unrest by opening up the political system, claiming that it could lead to “uncontrollable releases” of civil anger and “irreversible destabilization.”

Surkov’s latest warning against change in Russia, despite the potential for chaos, isn’t the first time that he has advised against any reformation in the political sphere.

Speaking to the Financial Times earlier this year, Surkov claimed that society has to be managed to find a “good compromise between chaos and order.”

“An overdose of freedom is lethal to a state,” he said. “Anything that is medicine can be poison. It is all about the dosage.”