The head of the Russian Orthodox Church, Patriarch Kirill of Moscow, has argued that his country’s independence from negative outside influence is what makes it truly free, in his eyes.

In an interview broadcast on the Rossiya-1 TV channel on Saturday, the religious leader was asked to comment on instances of Orthodox Christians having emigrated from the US to Russia. 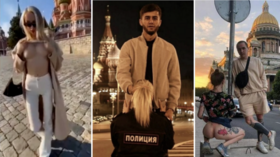 Russian Orthodox Church wants no criminal prosecution for insulting religion, on one condition

“I can imagine the types of reaction to my words from different corners, but I can prove that Russia today is the true leader of the free world,” Kirill said.

We’re free from the most powerful influences from abroad. We’re developing in accordance with our own path and, by God’s will, our path shall be successful. Russia can serve as an example for others.

“We have many problems, but these problems are solvable,” Kirill said.

Speaking about the state of Russian society, the patriarch said, “We currently don’t have a hot-button issue that would make societal interests collide and produce deep, irreconcilable contradictions.”

He added that the country benefited from a healthy diversity of opinion that “doesn’t destroy the foundations of human … and spiritual life.”

Previous Post: The Kaliningrad Governor told how he transfers COVID-19
Next Post: Russia-NATO war over Ukraine is becoming increasingly unavoidable