The EU should play a major role in discussions between Russia and NATO on the future of security in Europe, the bloc’s foreign policy chief insisted on Monday, suggesting Moscow and Washington also invite his organization.

Josep Borrell, who has served as the EU’s High Representative for Foreign Affairs and Security Policy since 2019, was reacting to a set of proposals published by the Russian Foreign Ministry on Friday, which asked the US and NATO for a set of security guarantees. Instead of dismissing the documents immediately, as some have suggested, Borrell is seeking to ensure the bloc is part of negotiations.

According to the ex-Spanish cabinet minister, “the EU must, of course, be at the table of any discussion on the European security architecture.”

“Russia’s Foreign Ministry this Friday released a draft proposal on security guarantees between Russia and the US as well as to European members of NATO. It is clear that the EU must be an integral part of such discussions,” his blog said. 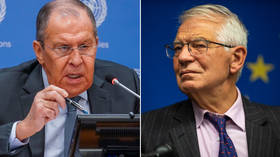 Lavrov says EU foreign policy head told him to STAY OUT of ‘our’ Africa, as he denies Moscow’s role in mercenaries invited to Mali

Borrell noted that the Helsinki Final Act and the Paris Charter, as well as the OSCE, are “key principles” on which European security has been built for the last 50 years.

He also commented on the tensions between Russia and Ukraine and suggested that Moscow seeks to “threaten and weaken” Kiev, suggesting that the EU “hope for the best and prepare for the worst.”

“We cannot exclude Russia’s desire to use this crisis as leverage for its declared purpose to reshape the security framework in Europe, also excluding the Europeans [sic] from the discussions,” he said. “But we know that our American allies will not fall into this trap.”

On Friday, the Russian Foreign Ministry released a draft version of two proposed treaties, one with the US and one with NATO. The documents are made up of a list of security guarantees, including a proposal that NATO won’t expand eastwards into states that were formerly a part of the USSR. If signed, it would also see troop movements near the Russian border be limited and would stop missiles from being placed near the frontier.

Previous Post: Kremlin lashes out at ‘dangerous fools’
Next Post: US & NATO won’t accept Russia’s security demands, so what next?