Ukrainians who refuse Covid-19 vaccines are laying the groundwork for a Russian incursion into the country, an advisor to the commander in chief of the country’s armed forces has claimed, amid rumors Moscow is planning to strike.

Taking to Facebook on Wednesday as opponents of mandatory Covid inoculation rallied near the Ukrainian parliamentary building in Kiev, Dmitry Yarosh, an advisor to Lieutenant-General Valeriy Zaluzhny, said that the protests could be a false flag operation.

“Friends, I don’t rule out that among these people paid and sent to the capital there are anti-vaxxers – an overwhelming minority – but the main purpose of this action is to prepare the ground for a large-scale invasion of Ukraine by Russian troops,” he said.

According to the military advisor, today’s Ukraine is walking on the edge of a knife amid rising tension in the region.

“We Ukrainians are just a few steps away from a huge war. Once again, it’s a matter of time and God’s will.” 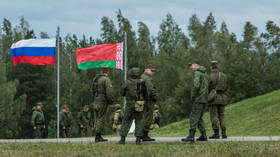 Prior to taking up the role, Yarosh was the leader of the neo-Nazi ultra-right group ‘Right Sector,’ which was banned as an extremist organization in Russia.

On Tuesday, Ukraine’s Defense Minister Alexey Reznikov announced that Ukraine will soon be able to mobilize more than 200,000 reservists who have combat experience should it be necessary.

The senior Ukrainian official’s comments come as Western politicians direct their attention to Kiev amid unsubstantiated claims that Moscow is masterminding an offensive against its neighbor.

Earlier this month, US Secretary of State Antony Blinken said that Washington was alarmed “by reports of unusual Russian military activity” and claimed Moscow may be “attempting to rehash what it undertook back in 2014,” referring to Russia’s reabsorption of Crimea.

Ukraine initially denied it had observed a buildup of Russian forces, before reversing its position and echoing Washington’s warning.

Moscow’s officials, however, have consistently denied any plans for an invasion.

A report by US news site POLITICO drew ire in the Kremlin earlier this month after it purported to show a build-up of troops and military equipment on the Russian-Ukrainian border.