The former head of the St. Petersburg headquarters of opposition figure Alexey Navalny has departed Russia, citing fears for her safety after an associate was arrested earlier this month and now faces up to 10 years behind bars.

Announcing her decision to flee the country in a Telegram post on Tuesday, Irina Fatyanova said that she had prepared herself for a lengthy legal battle and possible jail time.

However, she added, the arrest of Liliya Chanyesheva, the former head of the Navalny HQ in Ufa, a city more than 1,000km east of Moscow, made her pack her bags and move abroad.

Fatyanova said that it has been almost a week since she left the country after making the quick decision to gather her belongings, buy a ticket and go. 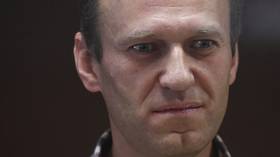 Chanysheva became the first member of Navalny’s network to be arrested on charges of setting up and running an ‘extremist’ organization, after a Moscow City Court handed Navalny’s structures and campaign groups the designation in June, effectively banning them from working in the country. If Chanysheva is found guilty, she could spend anywhere from six to 10 years in jail.

Navalny was detained at passport control in Moscow earlier this year while returning to Russia for the first time since falling ill on a flight from Tomsk to the capital in August, 2020. After making an emergency landing in the Siberian city of Omsk, he was flown to Germany days later following requests from his family.

Navalny and his German doctors say he was poisoned with the nerve agent Novichok, and the activist claims the incident was a state-sponsored assassination attempt. Medical professionals who treated him in Omsk have insisted that there were no toxic substances detected in the samples taken, and officials say Berlin has refused to share evidence.

Navalny is currently serving a two-year and eight-month jail term for violating the conditions of a suspended sentence handed down to him in 2014 for fraud. The opposition politician was found guilty of embezzling $400,000 from two companies.