The volume of Russian natural gas being delivered to Germany via Belarus has dropped by more than a third, according to data from Gascade, the operator of a large German pipeline network that supplies gas throughout the country.

The fall in deliveries came on Thursday, the same day that Belarusian President Alexander Lukashenko threatened that Minsk could stop transiting gas to the EU if Brussels imposed extra sanctions against his country. 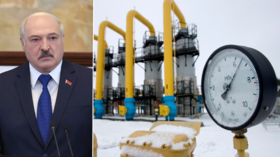 Belarus’ Lukashenko threatens to cut off gas to Western Europe

According to Gascade, between 8am and 9am Thursday, just 695,000 cubic meters of gas were pumped through the Yamal-Europe pipeline to Germany, around a third less than the one million cubic meters it was before.

The Yamal-Europe transnational gas pipeline runs from Russia’s Yamal peninsula to Frankfurt-an-der-Oder in Germany, via Belarus and Poland. Russian energy giant Gazprom owns the Russian and Belarusian portions of the system. Last year, around one-fifth of all natural gas sent to Europe went via Belarus.

On the same day as transit volume fell, Lukashenko revealed that Minsk would block all gas from reaching the EU if more sanctions are imposed on Belarus. This threat came after reports that Brussels was close to agreeing on a fifth round of sanctions against Belarus, which would target 30 individuals and the national flag-carrying airline Belavia. The previous four packages of economic measures have come since August 2020, when Lukashenko won what is believed by Brussels to be a rigged presidential election.

“We are heating Europe, and they are threatening us that they are going to close the border,” Lukashenko said, according to state media outlet BelTA. “What if we cut off the natural gas supply there? Therefore, I would recommend the leadership of Poland, Lithuania, and other heedless people to think before they speak.”