Russian energy giant Gazprom will withdraw gas transit to Moldova in the next 48 hours after Chisinau failed to settle its outstanding debt for supplies already delivered, a spokesman for the company announced on Monday.

At the end of last month, the Saint Petersburg-based company and Moldavgaz agreed a new deal after a lengthy standoff on price.

“Today is the scheduled date of payment. Yet, there is no payment,” Gazprom spokesman Sergey Kupriyanov said in a statement, adding that the state-owned firm is “extremely disappointed” with Moldova’s failure to fulfill its obligations under the recently extended contract.

The deal was struck in late October following weeks of stalled talks that almost led to an energy crisis in the eastern European country. Eventually, the contract was extended for five years and the Russian side started again pumping gas to Moldova on November 1.

According to Kupriyanov, Gazprom sought to set the “market gas price” for Moldova but eventually had to take account of a “difficult economic and financial situation” in the country as well as Russian President Vladimir Putin’s position. The company agreed to most of Chisinau’s terms, including the discounted price, he said. 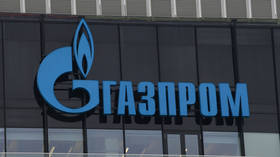 Gazprom only demanded that Moldova pay for its current consumption on time, the spokesman added, pointing to the fact that this term was breached and that it has forced Gazprom to take such a decision.

The October contract extension was held up by pricing disagreements and Moldova’s already mounting unpaid bills. At that time, Gazprom said that the sides managed to reach an agreement on “mutually beneficial” terms, including a mutually-agreed “price calculation formula” and Moldova’s debt audit.

Chisinau was close to introducing a state of emergency in case of failed talks. The tense situation also sparked allegations from Western commentators that Moscow was using energy supplies to exert pressure on Chisinau’s new government to abandon plans to draw closer to the EU. Gazprom repeatedly denied such claims, arguing that its concerns were solely business related.