A foreign policy spokesman for Germany’s Green Party has condemned new American sanctions levied against the Nord Stream 2 gas pipeline, slamming them as “unacceptable” even for opponents of the project, including his faction.

The Greens are likely to be part of the country’s next governing coalition, set to be announced imminently, almost two months after the federal election in September. The party is known to have a hawkish stance on relations with Moscow, and opposed the pipeline’s construction from day one.

“The new US sanctions are unacceptable even for the opponents of Nord Stream 2,” Omid Nouripour told Reuters on Tuesday. 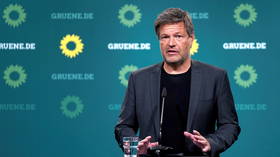 The pipeline, which was built to deliver Russian gas to Germany, is a controversial topic for the Green Party. The group opposed its construction and has pushed for the use of renewable sources of energy instead, but acknowledges that Germany relies on imported fossil fuel.

The project has also caused a rift between Berlin and Washington, who are typically aligned on most issues. Some in Germany believe the US’ opposition to the pipeline is purely economic in nature and an attempt to force Europe to buy American LNG instead of Russian gas.

“What kind of friendship are they striving for if they impose sanctions against friends when they do business with a third party?” Nouripour said. “The Nord Stream 2 pipeline was and remains a mistaken German decision, not an American decision.”

The party itself has not made a statement.

Nouripour’s condemnation comes just a day after US Secretary of State Antony Blinken imposed measures on a Russian-affiliated company, as well as two Russian vessels, apparently in an attempt to protect Europe’s ‘energy security’. The new sanctions are the latest in a series of American measures that have significantly slowed down the construction and operation of the pipeline. It is now complete but is not yet certified.

Last week, a representative of Germany’s Green Party, alongside counterparts from the center-left Social Democrats (SPD) and the liberal Free Democrats, revealed that a coalition agreement between the three parties is due imminently. Once confirmed, SPD leader Olaf Scholz will assume the role of chancellor, replacing Angela Merkel after her 16-year reign. The Greens, which will be the second-largest party in the coalition, will then enter the federal government for the first time since 2005.