Belarus has said that thousands of Middle Eastern refugees stranded on its border with the EU could soon cross the frontier and reach Germany as part of a breakthrough new deal struck with Berlin’s Chancellor Angela Merkel.

In a statement issued on Thursday, Belarusian leader Alexander Lukashenko’s spokeswoman, Natalia Eismont, said that the agreement had been reached after a call between the two heads of state.

According to her, under the deal proposed by Minsk, “the EU will create a humanitarian corridor for 2,000 refugees,” and Merkel will lead negotiations in Brussels to secure their safe passage to Germany. 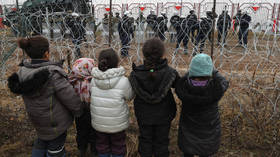 In return, Eismont said, Belarus will arrange flights for the remaining 5,000 migrants in camps along the frontier back to their homelands. However, at present, she added, only 400 or so have currently taken up the offer, with the first flight leaving Minsk for Iraq earlier on Thursday.

However, Germany’s Interior Minister Horst Seehofer has denied reports from Minsk and said it did not agree to let refugees in, labelling the statement as “fake.”

The news comes after Merkel and Lukashenko discussed the worsening humanitarian crisis on the border between Belarus and Poland earlier this week.

Warsaw has declared a state of emergency after a sharp spike in the number of attempted illegal crossings, deploying thousands of police officers and soldiers to patrol the demarcation line.

Brussels accuses Minsk of orchestrating the crisis by chartering flights from troubled nations like Iraq and Syria, then encouraging desperate people to try to breach the border with bolt-cutters. Belarus denies the claims, saying that EU sanctions have simply undermined its ability to police the area. 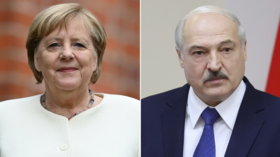 On Wednesday, Gabrielius Landsbergis, the foreign minister of neighboring Lithuania, which has also seen a rise in illegal migration, slammed Merkel’s decision to deal with Lukashenko bilaterally.

According to him, the embattled Belarusian leader “will do everything he can to make this conversation look like negotiations and to create as much confusion as he can. It is his aim to weaken us, to weaken our position, to make us doubt each other.” According to him, all talks should be organized by the bloc’s top diplomat, Josep Borrell.

Several people are understood to have died while sleeping rough on the border as temperatures plummet, and the UN has criticized Poland for purportedly pushing back desperate people seeking safety.