The Russian Embassy in the US has condemned “hostile actions” towards and “persecution” of the Russian diaspora in the country, after a major immigrant organization suspended its activities, citing FBI harassment of its members.

The statement came from the Russian mission on Friday, a day after the Russian Community Council of the USA (RCC) said it would “temporarily” suspend all of its work. The embassy harshly criticized the actions of the US authorities towards the community members, demanding that “the persecution of the Russian diaspora representatives be immediately stopped.”

“We are outraged by the hostile actions of the United States against our compatriots taken under the pretext of suspicion over the work in the United States without registration as foreign agents,” the embassy said in a statement.

We regard these actions as unfriendly towards the Russian Federation. The US authorities are thereby denying emigrants from Russia their right to stay in touch with their historical motherland and take an active part in preserving their own cultural and linguistic heritage.

The RCC announced the suspension of activities on Thursday, stating that dozens of its members have been targeted by the FBI over alleged violations of the Foreign Agents Registration Act (FARA). 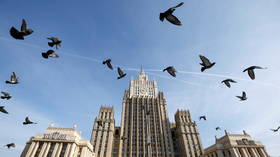 The FARA act, originally adopted in the late 1930s to resist Nazi Germany’s propaganda on American soil, was used by Washington in its anti-Communist drive during the Cold War era, and remains active today. The antiquated legislation has seen a lot of use over the past few years to target countries the US perceives as adversaries. The act has been used to force several news organizations to register in the US as “foreign agents,” including China’s CGTN and Russia’s RT.

One of the most controversial applications of FARA against a private individual was the case of Maria Butina. The Russian gun activist was detained in July 2018 and accused of secretly working for the Kremlin. After spending months behind bars, and time in solitary confinement, Butina entered a plea deal, admitting to conspiracy to act as “an agent of a foreign government” without proper FARA registration, and was ultimately extradited back to Russia. Upon her return, Butina told RT that she was on trial only “for being Russian,” while entering the plea deal was “the only right decision” to avoid a lengthy sentence and return home.