More than a year ago, Belarusian security forces detained 33 Russian mercenary fighters, almost all captured as part of a spectacular raid on a spa hotel outside the capital of Minsk, broadcast on the country’s primetime news.

Initially, the authoritarian leader Aleksander Lukashenko, then facing a serious challenge from the opposition in presidential elections, accused Russia of sending the soldiers of fortune to, in essence, topple him. The Kremlin rejected the accusation, and subsequently Moscow and Minsk quickly settled the issue: Lukashenko dropped his bizarre claim, and the mercenaries were returned to Russia.

For once, even the Western media displayed some caution. Often the first to point the finger at purported Russian meddling, even the New York Times and Washington Post – hardened veterans of America’s “Russiagate” disinformation campaign – noted that independent observers were not convinced by the Belarusian leader’s accusations.

So far so good, you might think. But the incident, commonly known as “Wagner-gate,” after the most important and well-known Russian mercenary company, has kept causing trouble. Not in Minsk or Moscow, but in Kiev. The reason for that outcome is that the whole mess was triggered by Ukraine with the knowledge and help of Western intelligence services. 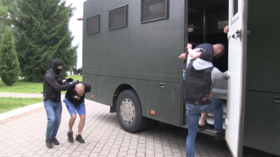 No, that’s not speculation or a “conspiracy theory,” but a fact. As we have known for a while, the raid was the result of a Ukrainian sting operation, begun in 2018 and code-named “Project Avenue.”

The scheme lured the mercenaries from Russia to Minsk. The plan was to then move them on to within reach of the Ukrainian security services, to be captured and face a major trial on charges they had allegedly committed war crimes in eastern Ukraine while fighting on the side of local separatists.

If the allegations made against the mercenaries were true, then they certainly deserved to be brought to justice somewhere, just like foreign “volunteers” and mercenaries fighting on Kiev’s side should face scrutiny and prosecution instead of Western support.

Whether Ukraine would have been a good place for these men to be tried is another question. There can be little doubt that Kiev, which has undermined the rule of law substantially in recent years, would have also used the trial as a media event and information war resource.

Yet the plan failed. Instead of walking into the trap waiting for them in Ukraine, the mercenaries were first delayed and then arrested in Belarus. Since that failure, the question in Ukraine has been why. In particular, critics of Ukrainian President Volodymyr Zelensky have tried to pin the blame for the botched operation on him.

Their allegation is, in essence, simple: Zelensky messed up the sting, thereby aborting a plan hatched under his predecessor Petro Poroshenko. Even harsher, maybe less reliable, critics go further and accuse Zelensky of sabotaging the operation deliberately in cahoots with – you guessed it – “the Russians,” or, at least, the Belarusians.

It is against this background that the Western investigative outfit Bellingcat, listed as a foreign agent in Russia, which unconvincingly claims to have no intelligence connections, has just published a long report on “Wagnergate.” Much of what Bellingcat has dug up confirms and details things already known or at least suspected about this operation. The outfit is funded by the US, UK and Dutch governments.

Two results stand out. First, regarding Zelensky’s role, his involvement remains unclear. There seems no room for doubt that he was well-informed about “Project Avenue” and gave his go-ahead. However, if Bellingcat’s (named) sources are reliable, then the fatal delay in its final phase can only be traced back to Andriy Yermak, the Head of the Ukrainian Presidential Office. Yermak, it seems, argued that the operation’s timing clashed with a just-negotiated ceasefire. This does not rule out Zelensky’s involvement in this decision, but insofar as there is a ”smoking gun,” it has been found with Yermak, at least for now. Bellingcat, it should be noted, has stressed that it was unable to independently verify this information.

Another negative emerging from its report is that it features no evidence for either Yermak or Zelensky doing anything worse than delaying “Avenue.” There seems to be no support for speculations that they tipped off either Belarus or Russia. Instead, the most likely explanation for the mercenaries’ arrest remains that they were conspicuous in their behavior, which was too disciplined and quiet to match their cover as “tourists,” as the Ukrainian media has noted. 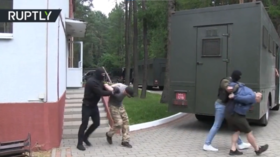 The second important upshot of this investigation concerns the manner in which the Ukrainian security services were planning to get a hold of the Russian mercenaries. Obviously, they could not hope to get them to enter Ukraine’s territory voluntarily. Hence, a plane-jacking would have to do: the basic idea was to make the men board a flight from Minsk to Istanbul, under the pretext that they would fly on from there to reach their destination, Venezuela. The Belarus-Turkey flight would cross Ukrainian airspace, and a fake bomb alert would then be used to give Kiev’s air controllers the formal, if ultimately fake, right to make the plane land.

None of this actually happened, as the men never left Minsk. Yet if it had come off, it would have been extremely similar to what Lukashenko later, in May 2021, presumably did to divert a Ryanair flight. On that occasion, the Belarusian dictator was after opposition activist and, as it happens, former far-right fighter for Kiev, Roman Protasevich. The West denounced his operation as state-sponsored air piracy and slapped more sanctions on Belarus.

The Ukrainian security services had, of course, systematically prepared deniability, i.e. lies and cover-ups, for their projected bid at air piracy. It is still intriguing to think about what would have happened if they had gotten to execute it. In all probability, the West would have applied its usual “right-or-wrong-my-client/ally” logic and turned two blind eyes.

And here is the irony of this whole affair: Let’s assume that the Ukrainian president did not deliberately sabotage his predecessor’s sting operation, let’s further assume that he gave it the go-ahead, and that, finally, it was only his close adviser who caused the delay that turned it into the fiasco we know.

The upshot, then, is of course that Zelensky initially approved an act of air piracy that was no better than what Lukashenko would do in May 2021. And if it did not actually occur, then that, according to Bellingcat’s – high-placed and named, if unverified – source is not Zelensky’s achievement. Because, remember, it was not him, but his head of office who postponed this part of the operation, and, as far as we know, not even due to any concerns over forcing a landing under false pretexts.

Make of that what you will. But Zelensky’s biggest problem is not really the suspicion that he somehow sank a complicated yet ultimately rather insane scheme to commit air piracy. Instead, it is the emerging probability that he first ordered it and then did not actually stop it. And here is the final Catch-22 for the Ukrainian president: If he were to come out now and prove that it was, after all, him who postponed and/or aborted “Project Avenue,” then Ukraine’s “patriots” on-overdrive would roast him alive for that. It would be funny if it weren’t so sad.

Previous Post: US Capitol protester seeking asylum in Belarus regrets role in pro-Trump riots
Next Post: Putin on the birthday of Patriarch Kirill awarded him the order