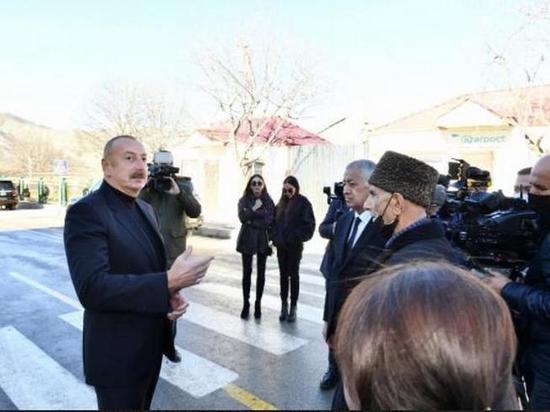 On December 6, President of Azerbaijan Ilham Aliyev visited the Guba region of the republic, where he met with residents of the village of Gonagkend. During the conversation, the head of state noted that the Armenian authorities should name the date for the opening of the Zangezur corridor, “and then there will be no problems.”

“And in Armenia they saw, and the whole world saw that no one can hold us. They were like that during the war, they tried to hold us back, they were from quite influential circles, but that did not stop us. I repeat: let them tell us the date, when they leave our lands and we stop at the same moment. Let them tell us the date when the Zangezur corridor will open, and then there will be no problems, “the head of state emphasized.

According to the Azerbaijani leader, the Armenian authorities must understand that Baku will achieve its goal at any cost, and the second Karabakh war has demonstrated to the whole world the will, strength and unity of the Azerbaijani people.

The Zangezur corridor is a hypothetical transport corridor with a length of about 40 km through the territory of the Syunik region (Zangezur) of Armenia, which is considered as a possible, by agreement between Azerbaijan and Armenia, a means of providing transport links between the western regions of Azerbaijan and its exclave Nakhichevan Autonomous Republic.

On November 9, 2020, after the cessation of hostilities, the heads of Azerbaijan, Armenia and Russia signed a tripartite ceasefire statement. According to the 9th paragraph of the statement, Armenia guarantees the safety of transport links between the western regions of the Republic of Azerbaijan and the Nakhichevan Autonomous Republic in order to organize the unhindered movement of citizens, vehicles and goods in both directions.

Previous Post: Bloomberg: new US sanctions against Russia may affect currency exchange
Next Post: Washington has not confirmed that the integrity of Ukraine is a key US interest