By Jonathan Millins, a PhD researcher at the University of Antwerp in Belgium

As the sound of flashbangs echoes out over the Polish-Belarusian border amid a worsening migrant crisis, a new buzzword is all over the political vocabulary – hybrid warfare. While the term is old, it has taken on a new dynamic.

In June, Lithuania’s foreign minister, Gabrielius Landsbergis, described the confrontation with Belarus as a “hybrid war operation,” arguing that Minsk is using migrants, flown in from Middle Eastern nations and bussed to the border, as a weapon to destabilise his country. Earlier this month, European Commission President Ursula von der Leyen said Belarus was engaged in a “hybrid attack” on the EU. This was followed up last week by Polish Prime Minister Mateusz Morawiecki, who accused Belarus of hybrid attacks amounting to “state terrorism.”

Whilst there is no single definition of ‘hybrid warfare’, it is often described as a set of non-conventional warfare methods, which could include political and electoral interference, sponsoring and financing of non-state groups, media and propaganda attacks, international lawsuits, cyber-attacks, and economic warfare. 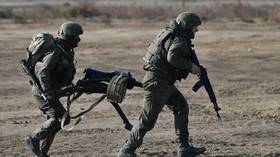 None of these hybrid methods are governed by the Geneva Conventions, and whilst some argue that international legal norms forbid their use, there is no definitive international legal order governing this grey zone in modern warfare. This perhaps explains why hybrid warfare, including the use of economic sanctions, is also so popular with many Western governments.

The possible use of migrants by Belarusian authorities to put pressure on neighbouring states could therefore fall into the category of hybrid warfare tactics. But why is President Alexander Lukashenko doing this now?

Allowing, or even encouraging, migrants to use Belarus as a corridor to the EU should not have come as a total surprise to Brussels. Earlier this year, Brussels stopped its financial support and technical assistance to Belarus for shared border management and security cooperation. The Belarusian Foreign Ministry informed the EU that they would not be able to fill the funding gap left in their budget and that the EU and its member states would have to take responsibility for any negative consequences. Lukashenko warned the EU in July, “we will not hold anyone back. We are not their final destination after all. They are headed to enlightened, warm, cosy Europe.”

Immigration and asylum policy has long been a sore spot for the EU, even before the 2015-16 refugee crisis. The EU’s handling of that episode, in which they paid Turkey over €3 billion to stop migrants entering the EU, whilst also turning a blind eye to human rights abuses and political repression in the country, must have made for an interesting proposition for Minsk.

Russian Foreign Minister Sergey Lavrov raised the prospect of the EU paying Belarus to stop the migrant flows only last week and encouraged Western countries to engage directly with Minsk, rather than via Moscow.

On Monday, Germany’s Angela Merkel had a phone call with Lukashenko to discuss the migrant crisis on the border – a rare diplomatic win for Lukashenko since the disputed election in 2020. Both Berlin and Moscow recognise that only a diplomatic response can lead to a resolution of the crisis. It is now the job of Berlin to persuade their more hawkish EU partners in Warsaw and Vilnius to agree.

Sun Tzu wrote in ‘The Art of War’ in the 5th century BC that, “in the midst of chaos, there is also opportunity.” As we witness the chaos on the EU’s border with Belarus today, it is Lukashenko who is taking full advantage of that opportunity, whilst the EU continues to falsely believe that yet more sanctions will resolve their problems with Minsk.

After four rounds of EU sanctions and with a fifth package on the way, Minsk has felt increasingly pushed into a corner with ever fewer levers to pull in order to defend itself. Constantly asking Russia for help might appear attractive on the surface, but Lukashenko knows that many in Moscow are running out of patience with the ongoing crisis in the country and want a resolution soon – with or without him as president. 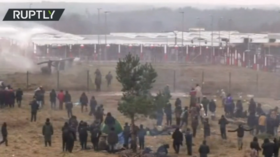 Those close to Lukashenko will say that he never intended to run for president again in 2025. Instead, it was always his plan to amend the constitution, reduce the powers of the presidency, establish the consultative All-Belarusian People’s Assembly (ABPA) on a constitutional footing, whilst ensuring the existing socio-economic model is maintained. In this scenario, Lukashenko would likely have left office around 2024 (potentially switching for a role in the ABPA) and using the intervening period to identify and prepare his successor.

Despite the unexpected political crisis facing the country after the disputed presidential election in August 2020, Lukashenko has sought to persevere with the original timetable. The next step in the process will be a referendum on the new constitution in January or February 2022, followed by new local and parliamentary elections in 2023. This would still leave Lukashenko the opportunity to depart from office on his own terms in 2024.

It is in this context that Minsk has had to identify ways to create the time and political space for the implementation of the plan. The use of hybrid tactics against the EU has been one such solution. Faced against the collective resources of the EU and NATO, determined on regime change, Belarus has few options but to maximise its limited resources and geographic position in responding to external threats.