Former Georgian President Mikhail Saakashvili has called on Washington to intervene and stop his prosecution for abuse of office, as he approaches seven weeks on a self-declared ‘hunger strike’ in protest at his treatment.

The former leader is said to have temporarily lost consciousness on Thursday as he marked the 49th day of his self-imposed starvation, according to his lawyer. Just the day before, Saakashvili was said to be in a critical condition.

In a prison note scribbled earlier this week, the former leader claimed that he has been subjected to being beaten and dragged across asphalt while other inmates watched on and jeered. He also said the government had refused his transfer to a civilian hospital and had forbidden him to have access to a phone or even attend his own trial. 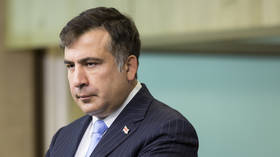 “If the U.S. doesn’t come to my defense it would be a terrible signal to all pro-Western leaders and populations” in the region, Saakashvili wrote, in a missive seen by Bloomberg.

US State Department spokesman Ned Price issued a statement on Thursday noting that Washington is closely monitoring the treatment of the former Soviet republic’s ex-leader.

“We urge the Government of Georgia to treat Mr. Saakashvili fairly and with dignity, as well as to heed the Public Defender’s recommendations about appropriate treatment,” the notice read, also imploring Tblisi to guarantee his right to a fair inquiry that he is able to attend.

The 53-year-old was detained on October 1 after sneaking back into the country as local elections were being held. He has allegedly refused food ever since his detention, in defiance of what he deems is a politically motivated imprisonment. Georgian Justice Minister Rati Bregadze, however, has questioned the legitimacy of his hunger strike, claiming that he eats porridge and continues to take medication.

Saakashvili fled Georgia in 2013 and has been the subject of several criminal cases over alleged abuses of power and other offenses during his stint in office. He relocated to the US briefly in fear of facing persecution. Just two years later, Saakashvili moved to Ukraine and went on to serve as governor of Odessa Oblast.

The country’s incumbent president, Salome Zourabichvili, has ruled out any possibility of pardoning her predecessor, who is set to serve at least six years behind bars.