Moscow’s traditional winter holiday festivities, held under the boughs of a giant Christmas tree, have been axed for a second straight year as Russia grapples with high rates of coronavirus transmission, the Kremlin has confirmed.

Announcing the cancellation on Thursday, Elena Krylova said that “unfortunately, due to the difficult epidemiological situation and in order to prevent the spread of Covid-19, especially among minors, it was decided that the traditional children’s New Year’s performance at the State Kremlin Palace will not go ahead.”

The New Year’s spectacle will be aired at the end of December on TV without an audience and will also be available online, Krylova promised. The two-week long non-working period is Russia’s main national holiday, having replaced Christmas as a non-religious celebration in the Soviet era. 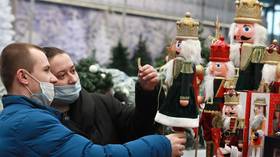 According to the chairman of the Moscow Federation of Trade Unions, the show’s format will be similar to last year, with a dramatic performance scheduled featuring actors and actresses. Mikhail Antontsev said the script of the play, called ‘The Glassblower’s Fairytale’, has already been approved.

The celebration was cancelled in 2020 due to the pandemic. Moscow marked a socially distanced Christmas and New Year, with authorities ruling a ban on large-scale markets and mass gatherings. Bars, restaurants and cafes were also subject to an 11pm curfew and attendees were required to take a coronavirus test prior to being let into public spaces and hotels.

The iconic Christmas tree event has been held since the early 1960s in the State Kremlin Palace. Prior to that, it had even held during the Great Patriotic War with Nazi Germany.

Previous Post: Merkel criticized for ‘dangerous’ call with Lukashenko over Belarus border crisis
Next Post: High-profile Russian MP could be stripped of immunity