Suggestions that Russia is planning an attack on Ukraine are completely groundless, and the entire scenario is being whipped up by media outlets, with the backing of top political leaders in Kiev, the Kremlin claimed on Sunday.

“This hysteria, which is being stirred up now in the Anglo-Saxon media, in the Ukrainian media, and is supported by Ukrainian politicians led by the head of state [President Volodymyr Zelensky], is absolutely unacceptable,” Peskov said. 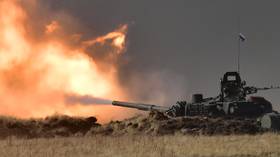 ‘Russian troops dismember the armed forces of Ukraine’: how a war between Moscow & Kiev could play out, and why it won’t happen

Throughout November, a number of Western media outlets have alleged that Russia is planning an “invasion” of Ukraine. In particular, America’s CBS News reported that a military incursion is increasing in likelihood “as the weather gets colder.”

All suggestions of preparation for war have been denied by Moscow, which has consistently stated that troop movements within Russian borders are no business of foreign countries.

“We fear, we have already said, that this escalation may be an attempt to hide [Ukraine’s] own preparations for a forceful solution to the Donbass problem,” Peskov continued. “That would be complete madness.”

Suggestions about alleged preparation for heightened conflict surround the situation in Ukraine’s Donbass region, where a “frozen” war has been ongoing for more than seven years. The conflict in the Donbass began following the events of the 2014 Maidan, when violent street protests toppled a democratically elected government. This eventually led to the two self-proclaimed republics of Donetsk (DPR) and Luhansk (LPR) declaring independence, a move recognized by neither Russia, Ukraine, or any UN state. According to Kiev, the regions are under the direction of the Kremlin. Moscow has repeatedly stated that it is not a party to the internal Ukrainian conflict.