Reports of a marked increase in Russian military activity near Ukraine are entirely unfounded, and not worth comment, the Kremlin said, on Tuesday, after US news site POLITICO published the sensational claims.

Speaking to reporters, President Vladimir Putin’s spokesman Dmitry Peskov insisted that purported revelations that Moscow is “massing troops and military equipment on the border with Ukraine” didn’t even merit a response. Satellite imagery accompanying the bombshell report claimed to show Russian hardware near the city of Yelnya, which is around 250 kilometers from the frontier with Ukraine, and closer to neighboring Belarus.

“The quality of these publications is not even worth commenting on and, in general, you should not pay any attention to them, because you yourself saw that the article is about the border with Ukraine,” he said, insisting that the photos “show the border with Belarus… There is no need to waste time getting acquainted with such low-quality rubbish,” he added. 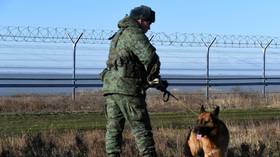 READ MORE: Russian army movements on border with Ukraine not a precursor of war, Kremlin says, citing need to defend against NATO buildup

“The movement of some of our military equipment or army units across the territory of the Russian Federation is exclusively our business,” the Kremlin official went on. “Russia has never threatened anyone, does not threaten and does not pose a danger to anyone.”

POLITICO’s article, published on Monday, cites influential defense review Jane’s as saying that the deployment “marks a clear deviation from the 1st Guards Tank Army’s standard training pattern.” According to the piece, this comes as “tension rises between Moscow and the West.”

In an extraordinary turn of events, Ukraine has also denied the reports, saying that “no additional deployment” of the Russian military had been identified in the region.

Earlier this year, claims that Russia was stepping up its presence in the region were claimed by politicians in Kiev to be a precursor to a Moscow-ordered invasion. However, the Kremlin strongly denied that it had any plans for military conflict with Ukraine, and the troops were sent back to their home bases days later after a series of exercises had been conducted.