Belarusian President Alexander Lukashenko has warned that the European Union should expect an influx of migrants attempting to seek asylum in the near future, as people leave Afghanistan following its takeover by the Taliban.

Lukashenko’s comments, made in a Tuesday interview with government media outlet Belta, came as thousands of migrants from the Middle East and North Africa sit trapped on the border with Poland, looking to enter the EU via Belarus. The president stands accused by Brussels of “weaponizing” migrants by flying them into his country and transporting them to the frontier, allegedly as part of a “hybrid war” against the West.

However, according to Lukashenko, the current crisis may soon get a lot worse. With the Taliban now at the helm in Kabul, many Afghan citizens are looking to Western Europe as a possible destination for asylum. 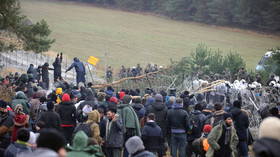 “The Americans invited [immigrants], but ordered Europe and Central Asia to take them in,” Lukashenko explained. “Truth be told, Central Asian countries excused themselves. What are people to do? They will go to Europe.”

According to the president, some Afghan migrants have come to Belarus via Central Asia and Russia, while others have taken alternative routes.

“They travel via Ukraine, too, but Ukraine is a friendly country [for the collective West], so they keep quiet for now,” Lukashenko claimed. “Belarus is not friendly, so it has to be slammed.”

He offered no evidence for the claim that migrants have come via Ukraine.

As things stand, asylum seekers looking to cross into Poland from Belarus are camped in no man’s land between the two countries, hoping to be let in. The crisis began in June when Lukashenko said that his government would no longer help the EU stop illegal immigration and the situation has deteriorated significantly in the past two days.

While Brussels accuses Minsk of deliberately escalating the crisis, Lukashenko maintains that blame rests on the shoulders of the EU and the US because people are fleeing hostilities caused by the West.

The situation has also caught the attention of the UN, which earlier this week expressed concern over the deteriorating situation, noting that “human beings should never be used as political pawns.”

Previous Post: Russian soldiers tried to bribe their way INTO a war zone – reports
Next Post: The clash on the EU’s border with Belarus isn’t a ‘migrant crisis’