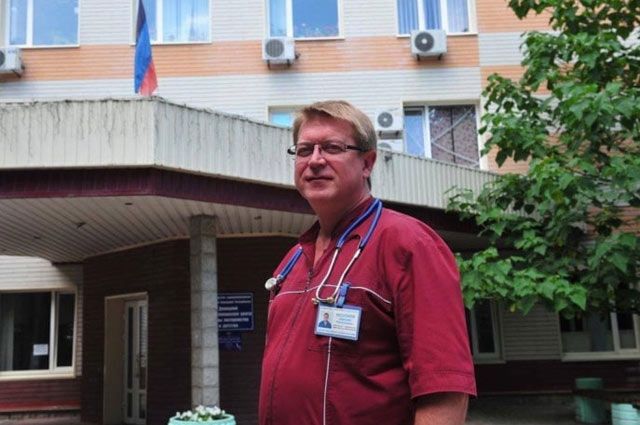 War gives birth to heroes not only at the front, but also in the rear. One of them —children's doctor Dmitry Bessonov.

June 13 Donetsk survived a terrible day. Almost continuous artillery shelling continued from morning until evening. In total, more than three hundred shells were fired across the city, Ukrainian troops did not spare even the maternity hospital, where at that moment there were 178 patients and 35 babies. While the staff hid women and children in the basement, the deputy director of the center, children's doctor Dmitry Bessonov, with a nurse and a doctor on duty, remained in the neonatal intensive care unit — along with two children who could not be disconnected from the apparatus. The blast wave shattered the glass ceilings, but neither the children nor the doctors were injured. Aif.ru has found a hero doctor.

Dmitry Bessonov: — For 8 years, we have already become accustomed to all sorts of sounds of war: louder, quieter, flies away, flies in, closer, farther … And we were decently oriented in these moments. In certain periods, they did not even pay much attention to it. Well, it crashed and crashed. But what happened on June 13, of course, is a real horror even for us, because we have not seen such a dense fire since 2014. The shells lay down very close to our hospital, near the neighboring buildings — After all, we have a rather big hospital town, where there are several medical institutions. Some of them suffered from shelling in the first half of the day. All this was well audible and very disturbing to the staff. Of course, everyone who could be was transferred to the basement, where they were placed as in a shelter. But, unfortunately, we could not evacuate two babies due to their serious and not quite stable condition. Disconnecting them from life support systems, ventilators could have had very serious consequences.

Only after a while did they realize that the shelling was not over. After all, we got used to these eight years that we shot, then the onslaught passed, then there may be a lull. But there was no lull here.

It was a day off, I was at home with my family. And I was very worried that my employees, who were directly at their workplaces in the maternity hospital, could panic. After all, no one knows in advance how much endurance and self-control you will have in a difficult situation, so as not to make an irreparable mistake. And to turn off the children from the apparatus, whom we hardly nursed — one was born prematurely, and the other with a severe intrauterine infection — it was just scary.

— And you could not stand it and decided to go?

— Yes. When I was driving to work, the city was already completely empty. People hid in underground passages, cellars — who got where. On the way, here and there, gaps were constantly heard. At about 4 pm I arrived at the hospital.

For the first two hours, I had the impression: now I’ll get the job done, I’ll help, I’ll support people, and maybe I’ll be able to leave. But these plans were immediately destroyed, because at 18 o'clock heavy shelling began again. And it was already very close. We chose the safest places in the department, in the hallway, where the children were least threatened, and they continued to receive therapy.

Somewhere around 7 pm there was a completely terrible arrival on the roof of our building — only one and a half to two dozen meters from our department, where the children were. The blast wave knocked out the windows, destroyed the glass ceilings between the resuscitation rooms, but, thank God, neither the equipment, nor the oxygen supply systems, nor the electrical network were damaged. The children survived everything safely, their condition did not worsen. We spent the night in the department and the next day we transferred the children to the intensive care unit of the Republican Children's Hospital. Now their health is not in danger. I must say that if the decision to transfer to another hospital had been made on June 13, the day of the shelling, then the transfer, of course, would have significantly worsened the condition of the children. At that time they were still unstable. We just did not have enough days, maybe even half a day, to achieve stabilization. Here is such a fatal combination of circumstances.

— It turns out that the air raid alarm did not work that day? Explosions started right away?

— There was a notification, but I can’t evaluate how effectively it works. In 2014, they fired more often from mortars, Gradov. We could even track down exactly where it would land. Now more heavy and long-range jet systems, “Hurricanes” are used. and others. We hear whistles, then pops — Air defense works, and then it arrives. It is difficult to navigate where the breaks will occur.

— I heard that a baby was born in the basement during the shelling.

— Yes, they gave birth in the basement. And they were premature. But, thank God, the term was already quite decent — 35 weeks. The baby is fine.

— What are the moods of your colleagues now? How many left after the start of the special military operation? Or maybe someone, on the contrary, came to help?

— No, nobody came. But there was no mass exodus after February either. Of course, people are very much alarmed, worried, many are afraid for their loved ones. There are isolated cases of layoffs, but not among doctors, more among nurses and junior medical staff.

In any case, restoration work is needed now, we cannot provide specialized medical care in such conditions. Therefore, in the near future, the maternity hospital will not work. Some of the employees are transferred to work in other maternity hospitals, but most of them take vacations. Take a break, go out of town (fortunately, the weather allows), change the picture before your eyes and the sound track. Constant shelling adds to the nervousness.

It is difficult for me to say how things will go on, because, by and large, there has never been anything like June 13th. If someone’s nerves in this regard fail, they surrender, probably, we should expect that some kind of outflow of personnel will happen. Will there be a repeat of 2014, when so many left? Don't know. I remember it all very well. It was very difficult. Then we had a few specialists left — 4-5 gynecologists, 2-3 neonatologists, 5 midwives and 5 nurses for a huge maternity hospital. All those who considered it impossible to stay here left. Someone for ideological reasons. Others for security reasons, and then became ideological.

— But have you already made up your mind to stay?

— I made this decision on May 26, 2014, when planes began flying over us and shelling our airport. Then my colleagues from other regions of Ukraine, with whom we maintained friendly relations, offered me a job. They thought that once everything was bad in Donetsk, we had to go to them. Moreover, the offers were quite tempting — not district hospitals, but the country's leading perinatal centers. But I didn’t have the guts to say, “Yes, of course.” I didn't see myself living and working elsewhere. But what about my patients? All the same, everyone will not leave, people will remain in the city, they need help. I love my city, here are the graves of my parents, I was born here, studied at the Donetsk Medical Institute. The department where all the recent events took place opened in 1995, and I have been working there ever since. All 27 years old, never worked anywhere else. All life — neonatal therapy. How could I leave it all? Didn't want to sacrifice anything.

— Is your family with you?

— When can the hospital return to work?

— So far, no one undertakes to voice these terms. About a hundred window openings were damaged. With proper organization, they can be restored in 2-3 weeks. The main problem is with the roof. It now has a huge funnel from a shell hit, a storm collector is destroyed. Water from the entire roof flows unimpeded up to 2-3 floors, damaging everything in the world in its path. It's unclear how long it will take to repair. There are alternative options. If we have time to close the window openings, we can somehow organize the work of the services in order to receive patients partially. Again, we are planning all this on the basis that this will not happen again. But nobody gives guarantees. If something like this happens, then, naturally, all our plans will change a lot.

— Competent people who can help us are connected. All applications have been sent. The necessary funds for repairs are allocated, and there it will be seen along the way what else is needed. The task of restoring the city — state level. Therefore, all funds will be attracted. If this is not enough, we will turn to those who can help us.

— Do your patients have enough medicines?

— It depends on what you compare it to. If with the stock of our pharmacy before the start of the war, then, of course, now it’s not at all the same level. Then we didn't need anything. Parents had to buy a maximum of baby care items. Recently, there have been difficulties with certain specialized drugs, including due to sanctions. But all issues are resolved. The supply of medicines, which are brought to us by humanitarian convoys from the Russian Federation, helps.

— How did your maternity hospital work before the special military operation and what now?

— Until 2014, our maternity hospital received 4.5-5 thousand births per year. Over the past year, we have had more than 2 thousand births. With the outbreak of hostilities, the indicators decreased. The people left, they began to give birth less. But we reoriented our work and, without refusing anyone, took 30% of the births of the total number in the republic. There are 15 maternity hospitals in the DPR, 6 — in Donetsk itself. Moreover, they took on the most difficult pregnancies, carried out the entire cycle of treatment for newborns, except for surgery. Until the last shelling, we had about 6-7 children per day. So it is very difficult to overestimate the importance of the work of our center for the republic. Now, of course, we will be temporarily idle. But we are determined to recover and continue working.