Russia’s state energy giant Gazprom has announced that it will not begin the process of cutting off exports of gas to Moldova despite the Eastern European nation failing to settle up a multimillion dollar bill for its deliveries.

In a statement issued on Wednesday, the firm’s spokesman, Sergey Kupriyanov, said that it had received a request from the country not to suspend its supplies despite the deadline to pay $74 million for its current consumption expiring earlier that day.

According to him, an extension has been agreed “as an exception, showing goodwill and understanding of the difficult situation the citizens of the Republic of Moldova have found themselves in.” Under the deal, the country will have until next Friday to pay. 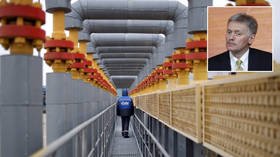 The news comes hours after Gazprom warned that “the existing payments from Moldova for gas have not been collected. A 48-hour period following the notification that supplies will be terminated due to non-payment expires today.”

The company had previously told Chișinau that it would have to settle around $74 million in debts for its current usage or face a cutoff. The bill, which Gazprom insists must be paid, relates to the most recent round of exports. However, the former Soviet Republic has also racked up around $709 million in debts for previous months’ supplies.

The impasse over payment held up a new agreement between the Moscow-based firm and Moldova last month, with supplies restricted and energy prices rising in the country as a result.

Kupriyanov previously said Gazprom sought to set the “market gas price” from Chișinau but eventually agreed to slash the cost because of the country’s “difficult economic and financial situation,” as well as pressure from Russian President Vladimir Putin.

Under the terms of the deal, supplies would resume provided the country pays for its current consumption and enters talks about back payments for the outstanding sum. The standoff prompted allegations that Moscow was seeking to exert pressure on Moldova to tear up an energy deal with the EU.

However, Gazprom maintained that the situation had nothing to do with politics and that the company was simply unwilling to operate at a loss.