The Russian State Duma has published a draft motion condemning Washington for allegedly discriminating against its citizens living in the US, calling on officials to respect their rights and put an end to hostile relations.

The text, published by the Russian parliament on Tuesday, condemns the “harsh and unprecedented pressure” exerted by American authorities that reportedly forced an influential group of Russian civil society organizations in the US to suspend its work last week.

“The State Duma demands an immediate end to the harassment of representatives of the Russian community in the United States of America and respect for their rights,” the statement reads. 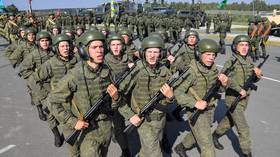 Is Russia going to invade Ukraine?

The proposed document also claims that at least 300 Russians living in the US have been subject to persecution by American intelligence services. According to lawmakers, alleged “searches, interrogations, seizures of personal belongings and pressure as part of an investigation into a suspicion that has nothing to do with reality… grossly violate the rights of Russian compatriots to maintain contact with their historic homeland.”

Russian citizens in America are forced to abandon the preservation of their mother tongue and culture, as well as the right to their identity, which contradicts the US’ basic rule of law, its authors claim.

Upon passage, the document will be sent to Russian President Vladimir Putin and top government officials, as well the US Congress. The development comes as the Kremlin’s relations with the White House hit a new low point.

The country’s Defense Minister Sergey Shoigu said on Tuesday that American nuclear-capable bombers have ramped up their presence on Russia’s borders in comparison to this time last year, flying dozens of missions nearby. According to Shoigu, the minimum distance American strategic bombers got from Moscow’s frontier was 20 kilometers, testing their ability to unleash atomic weapons.

Anti-Russian sentiment abroad has become a key focus for politicians in Moscow in recent years. Earlier this month, State Duma Deputy Boris Chernyshov said that the government must take measures to preserve Russia’s culture abroad, and proposed putting purported Russophobes on blacklists and slapping them with economic sanctions.