Russians living in the regions outside the capital need to be encouraged to pick up a trowel and take a job on one of the city’s many building sites, Moscow’s mayor has said, amid a shortage in migrant labor during the pandemic.

Speaking during the commissioning of a new residential building on Wednesday, Sergey Sobyanin said that more needs to be done to get citizens to apply for roles that currently depend on workers from abroad. “We need people with different qualifications, for a different salary – and fewer migrants, of which we have a lot today,” he announced.

According to him, a key priority needs to be “attracting more Russians from nearby areas, raising wages and improving working conditions.” 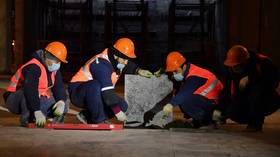 Alexey Dobashin, the general director of the KROST real estate development firm, who hosted Sobyanin at the event, said that things were already improving in this regard. According to him, the number of non-Russian builders on his sites had dropped by 15% since the start of the Covid-19 pandemic last year, and qualified workers were earning around 120-150,000 rubles a month ($1,650-$2,000).

In March, officials warned that an additional 1.2 million workers were needed to plug gaps in the industry. Minister of Construction, Housing and Utilities Irek Fayzullin declared at the time that “there is a personnel problem. A large number of builders who came from the near-abroad [former Soviet states] were forced to leave due to the coronavirus.”

In December 2020, the Ministry of Internal Affairs estimated that almost half of all migrants living in Russia had left during the pandemic, with only around six million foreign workers – compared to as many as 11 million in normal times. Moscow, which saw a 40% drop in overseas workers, reported that vacancies for taxi drivers and couriers had risen by close to 85%, while unfilled roles for builders had surged by 30%.

Around the same time, Sobyanin’s office confirmed that a record number of skyscrapers had been built in 2019, with the city seeing a construction boom. Earlier this year, international price index figures showed that Moscow, along with St. Petersburg, is now among the 10 fastest-growing cities for rising property prices as demand surges. Last year, Marat Khusnullin, a former deputy mayor of Moscow, was appointed as one of the country’s deputy prime ministers and given oversight over construction and regional development.