Speaking to RTVi TV, Alexey Venediktov claimed that Navalny fell victim to an operation run by the authorities in Moscow.

In January this year, the Western-backed activist returned to Russia from Germany, knowing that he would likely be put in prison for breaking the conditions of a suspended sentence handed to him in 2014, when he was found guilty of embezzling 30 million rubles ($415,000) from two companies, including the French cosmetics brand Yves Rocher. 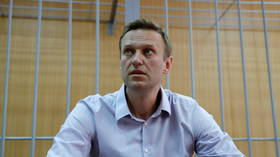 “Navalny was lured to Russia by the intelligence services. I am absolutely certain that there is an agent in Navalny’s inner circle who is neatly conducting certain thoughts on behalf of the special services,” Venediktov claimed.

“I have three people under suspicion,” he continued. “I told Navalny about this even before he left. There are people in his entourage whose biographies have been wiped with an eraser. We don’t know anything about them until they became Navalny’s associates.”

This is not the first time Venediktov has claimed intelligence officers manipulated Navalny. In March, the journalist claimed that the opposition figure’s entourage was “clearly infiltrated.”

“The history of Russia’s revolutionary movement in the early 20th century shows that there was not one single revolutionary party that did not have a secret service agent in high places,” he said.

Venediktov, a controversial figure, is the editor-in-chief of radio station Echo of Moscow. Earlier this year, close Navalny ally Maria Pevchikh slammed the journalist for being the public face of the Russian government drive to promote electronic voting. Pevchikh dubbed it a “disgusting scam.”

Previous Post: As an ex-British Army officer, I can see the UK’s new mission to bring ‘freedom’ to Eastern Europe will end in disaster
Next Post: Belarus’ state airline cancels Middle Eastern ‘migrant flights’ from UAE