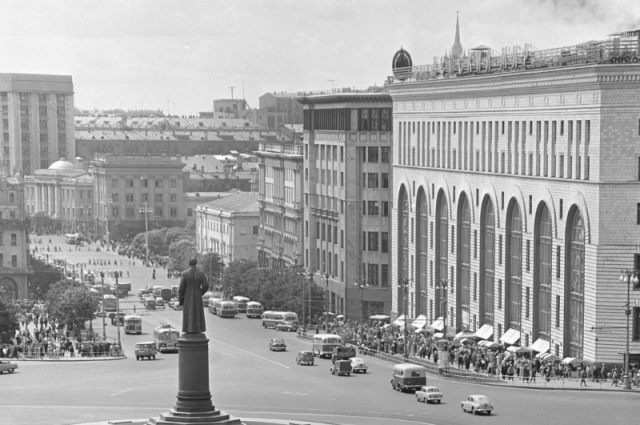 On June 6, 1957, an amazing store called “Children's World” opened in Moscow. Its construction was conceived as a gift to all the children of the Soviet Union. The author of the project was the famous architect Alexey Dushkin. According to his designs, a high-rise building was built on Red Gate Square (one of the seven Stalinist skyscrapers), railway station buildings in a number of cities, the Ploshchad Revolyutsii metro station, Mayakovskaya and "Kropotkinskaya".

Thanks to the  glass facades, aluminum structures, large-scale four-story arches and large areas, the Detsky Mir building became not only the largest children's store in the USSR, but and the first domestic world-class department store.

Different, but also for children

This building appeared on the site of the Lubyansky Passage, demolished in 1953. And the passage itself was built in the quarter between Teatralny Proyezd, Lubyanskaya Square, Pushechnaya and Rozhdestvenka — in the old trading place of Moscow. “Children's World” was built with partial use of the old foundation left over from Lubyansky Passage. The construction of a grandiose children's department store in the difficult post-war years was by no means accidental. They really tried to give the best to the children and in difficult times. But the most interesting thing is that the store with the name "Children's World" I've already been to Moscow, and it opened ten years earlier, in September 1947 . It occupied part of the building at the very beginning of Kirov Street (now Myasnitskaya), where the Biblio-Globus store is now located. At that time, that children's store was considered a branch of the Central Department Store.

Old “Children's World” was very popular with  buyers, but the area of ​​the trading floor was too small. Especially for him decided to build a whole building. True, at first they planned to confine themselves to the reconstruction of the Lubyanka passage, but then they demolished the old passage and began to build a completely new building in its place. As a result, a seven-story building was erected with two underground floors and attic rooms with a total area of ​​more than 55 thousand sq. meters.

“Children's World” became the first commercial building in the USSR, where escalators were installed. Daylight entered the room through huge glazed arches. And in the evening, the magical light from these arched windows invited children and adults into the world of miracles and tales. Granite, ceramic blocks were used in the exterior of the building, and in the interior — marble, bronze, precious woods. In the center was a huge two-tiered hall. Its vault at the level of the fourth floor was made of reinforced glass and decorated with stained glass. The initial project included mosaic panels by Pavel Korin, but they had to be abandoned. It was at that time that Nikita Khrushchev began an uncompromising struggle against architectural “excesses”. When he examined the drawings, stated that the department store was “very wastefully designed.”

In the summer of 1957, the World Festival of Youth and Students was to be held in Moscow. In order not to lose face in front of foreign guests, the authorities did not dare to radically get rid of all the “architectural excesses”. Yes and a gift to Soviet children would look poor without them. The desire to complete the construction of the building by the opening of the youth forum affected the quality. So, for example, it happened that mixed bricks were used, the slabs were laid incorrectly. But this became known after many years during the reconstruction.

The main place of the “Children's World” there was a pedestal of the central department of toys. First, there was a tower-clock with various little animals, then the good doctor Aibolit, surrounded by cute monkeys, who from time to time made dizzying jumps, took his place. It happened that children and adults froze for a long time before the fairy-tale action unfolding before their eyes, forgetting about purchases.

The railway for half wages

In "Children's World" it was everything that a child of that time could only dream of. For example, a toy railway made in the GDR. For this miracle, depending on the configuration, it was necessary to pay from 100 to 350 rubles. Moreover, the average salary in the country was then 750 rubles. After Khrushchev's monetary reform, this beautiful toy began to cost ten times less, but and the salaries of the parents after the denomination decreased by the same same.

Almost every male baby in the USSR wanted to have another toy that had been produced since the 1950s for three decades. It was called “Pedal Horse” (official name) and was a three-wheeled structure in the form of a racetrack with drawn by a horse. The toy cost about 30 rubles. This device moved with the help of pedals, but there was no steering wheel, you had to control it with a bridle. It was inconvenient, hence  the well-known expression "Pedal horse" appeared.

All kinds of toys-designers made of metal and plastic — from the simplest to complex. They cost much less, and differed from the number of parts and what of them could be assembled. Depending on this, their cost also fluctuated, but, as a rule, it did not exceed a few rubles.

Saber on bra and scarce jeans

Little babies that could be bathed cost from 20 to 80 kopecks. For a plastic doll in a dress with rubber head parents had to pay at least 2 rubles, and for walking with closing eyes — three times more. Children's shoes cost on average from 2 to 6 rubles, a coat — about 25. For a domestic baby carriage it was necessary to pay 27 rubles, and for imported German — 50.

On the shelves of "Children's World" new items appear regularly. It was there that children's tights appeared for the first time in the country, replacing traditional stockings, which were held in place with a child's bra with elastic bands. And they were worn not only by little girls, but also by boys. And the most "cool peanuts" attached to these bras a toy saber. imported extremely scarce and not children's goods. With a happy coincidence, it was even possible to buy branded men's Italian jeans there for 60 rubles.

Previous Post: “My love, my sunshine.” “Honeymoon” of Nicholas II lasted 23 years
Next Post: “The mother-in-law here is just a fascist.” Why are our women getting divorced in India?