The crisis caused by the mass build-up of asylum seekers on the border between Belarus and Poland is showing no sign of dying down, and it could last for many more months or even years, a top official in Warsaw has warned.

Speaking to Polish radio on Wednesday, Defense Minister Mariusz Blaszczak said that there had been further attempts on Tuesday night to illegally cross the border. Video from the frontier has shown Polish armed forces using tear gas and water cannons to fight back the migrants.

As things stand, thousands of people are stuck in no-man’s-land between Belarus and Poland, waiting to be allowed into the EU so they can claim asylum. The vast majority are from the Middle East. 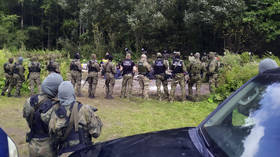 In an attempt to resist taking in asylum seekers, Poland is to build a €353 million ($399 million) wall on its border with Belarus, due to be equipped with motion sensors and a monitoring system.

Poland has received criticism from some human rights groups for its treatment of migrants. In September, Warsaw’s treatment of the migrants was criticized by London-based human rights NGO Amnesty International, which accused Warsaw of the “forced return” of Afghan citizens who were taken back across the border after successfully crossing into Poland. They were stuck without food, shelter, and other provisions.

The migrant crisis on the frontier between Belarus and Poland, which has unfolded over the summer and autumn, has escalated in the last few weeks. The crisis began in June when Belarusian President Alexander Lukashenko said his government would no longer help the EU stop illegal immigration. He stands accused by Brussels of “weaponizing” migrants by flying them into his country and transporting them to the border, allegedly as part of a “hybrid war” against the West.