Nine opposition politicians in Georgia’s parliament are beginning a hunger strike to demand that the jailed former President Mikhail Saakashvili be transferred to a civil hospital from his prison, it was announced on Monday.

The MPs, who represented the party founded by Saakashvili – the United National Movement – announced on Sunday that they would strike in solidarity with their former leader, who is currently behind bars and has refused food for more than a month.

After sneaking into the country, Saakashvili was discovered after only a few days. He was arrested and taken to jail to serve prison terms for abuse of power. The sentences were handed down in absentia while he was abroad. 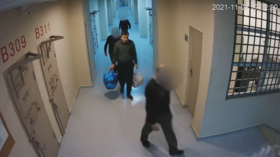 “You are well aware of the situation in the country, the third president of Georgia is on hunger strike for 45 days, and he is not receiving adequate medical services,” said David Kirkitadze, United National Movement MP, with the demand that Saakashvili is taken to a hospital outside of his prison, where he is currently being treated.

Saakashvili is staging a hunger strike to protest what he believes is politically motivated imprisonment. Despite this, current President Salome Zourabichvili has ruled out any possibility she would pardon her predecessor.

Other government officials have challenged the authenticity of Saakashvili’s protest, with Georgian Justice Minister Rati Bregadze claiming that he eats porridge and continues to take medication.

Saakashvili was president of Georgia for nine years between 2004 and 2013, before moving to the US shortly after leaving office due to fears of prosecution.

Two years later, he relocated to Ukraine to become governor of Odessa Oblast, at the invitation of then-President Petro Poroshenko, who also granted him a Ukrainian passport.

This led to him losing his Georgian nationality, as the country forbids dual citizenship. Just two years later, after he left his post in Odessa, Poroshenko took away his Ukrainian nationality, leaving him stateless. Saakashvili then returned to the US, living in New York.

In 2020, he was invited back to Ukraine by Poroshenko’s successor, Volodymyr Zelensky, to head the country’s National Reform Committee.