Russian President Vladimir Putin has told his French counterpart Emmanuel Macron that the EU should talk directly with Minsk about the plight of refugees on the Belarus-Poland border. The call also touched on the Ukraine crisis. Read more 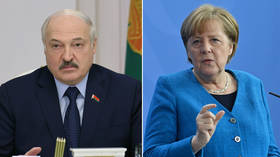 Macron phoned Putin on Monday and the two leaders spoke for almost two hours, a senior French official told reporters. While the Elysee Palace had not yet released a readout, at the time of writing, the official said that there was “no convergence on the origins of the current crisis at the Belarus border,” but that Putin “understood the need to put an end to it,” mainly out of decency toward the “instrumentalized” refugees.

According to the Kremlin’s readout of the call, Putin drew Macron’s attention to the “extremely harsh treatment” of the refugees by Polish border guards, and emphasized the prudence of the EU leadership discussing the problem directly with President Alexander Lukashenko of Belarus.

Putin has maintained that Russia “has absolutely nothing to do with any of this,” most recently in an interview with Rossiya-1 TV on Saturday. Thousands of aspiring asylum seekers have gathered on the Belarus side of the border with Poland over the past week, hoping to cross into the EU, only to be met with 15,000 Polish troops and heavily armed police.

Warsaw has accused Minsk of “hybrid warfare” and the Polish prime minister said on Sunday that “words alone are not enough to stop” Belarus, seeking help from NATO. France has assured Poland of its “full support” and readiness to provide assistance.

Macron and Putin also discussed the situation in Ukraine, after the foreign ministers of France and Germany issued a statement warning Moscow of “serious consequences” for any attempt to undermine Kiev.

According to the Elysee Palace, Macron conveyed his concerns about Ukraine to Putin. The Kremlin said Putin noted the “provocative character” of US maneuvers in the Black Sea. The Russian president also highlighted the ongoing “destructive policy” of Kiev toward the disputed regions in eastern Ukraine, which is going so far as to use drones against civilians.