The group of Middle Eastern refugees stuck in Belarus hoping to cross into Poland needs to be relocated into safe accommodation and given suitable support to prevent any further loss of life, a UN spokesperson has said.

In an interview with Russian news agency TASS, Shabia Mantoo from the office of the United Nations High Commissioner for Refugees (UNHCR) explained that the current priority should be to keep those attempting to enter the EU alive.

Her comments come as thousands of desperate people wishing to enter the European Union remain in Belarus, hoping to be allowed to ask Warsaw for asylum. The Polish border guards have refused to let anyone cross. For weeks, many were camped outside in no man’s land between Belarus and Poland, but they have since been moved to a logistics warehouse. There have also been reports of some deaths. 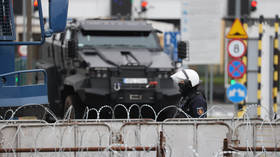 “[They] need to urgently be relocated to safe and dignified accommodation where their basic humanitarian and medical needs can be met, and counseling can be provided,” Mantoo said on Wednesday.

The UNHCR spokesperson also called for the authorities to find “suitable solutions for each individual, based on their specific profile and individual circumstances.”

According to Mantoo, many of the would-be asylum seekers have legitimate reasons to attempt to enter Poland, such as wanting to “reunite with family members elsewhere in Europe,” and noted that the UNHCR is speaking to all relevant authorities and urging them to “explore all humanitarian options to respond to this situation.”

The migrant crisis began in June when Belarusian President Alexander Lukashenko said his government would no longer help the EU stop illegal immigration. He stands accused by Brussels of “weaponizing” migrants by flying them into his country and transporting them to the border, allegedly as part of a “hybrid war” against the West. The situation got significantly worse on November 8, when several thousand refugees approached the Polish border from Belarus and refused to leave the area for a fortnight. In the last week, some have been moved to a transport and logistics center, while a handful have flown back to their home countries.