An RT crew has captured the harsh life inside the refugee camp on the border between Belarus and Poland, witnessing cold, hunger, and the desperation of its inhabitants.

“We’ve seen it all: blood, death, starving kids, desperate mothers,” said RT’s Konstantin Rozhkov, who spent three days at the makeshift camp near the Belarusian city of Grodno, which has been making international headlines for more than a week now.

Several thousand refugees from the Middle East and North Africa, including many women and children, arrived at the border between Belarus and Poland last Monday. They’ve been staying at the barbed-wire fence since then, trying to cross into the EU, but the Polish border guards have so far been repelling their attempts to do so.

“Poland is so dangerous. He tells us: ‘I kill you if you go back there,’” one of the would-be asylum seekers said about the officers on the Polish side in an exclusive video, uploaded on RT’s YouTube channel. 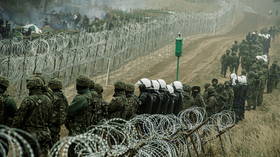 Belarus border crisis isn’t a war, but it could become one

Warsaw and the EU claim that the crisis was deliberately created by the Belarusian government of Alexander Lukashenko, saying that large numbers of flights to Minsk have been laid on from troubled nations like Iraq, Iran and Syria. Minsk denies responsibility and insists that it was simply no longer prepared to intervene and stop people seeking to cross the border with the EU in the context of the sanctions imposed by Brussels on Belarus.

The conditions and the camp have been tough for those attempting to cross, many of whom actually have money as they claim to have paid up $2,600 to tourist guides that assured them that access to the EU from Belarus was guaranteed. But now all those dollars can’t buy food, water or a ticket across the border for them and their kids. Instead, they’re forced to vie with each other for scarce humanitarian aid.

The desperate people are burning wood they chop in the forest to get warm during freezing nights. Some have been injured after failed crossing attempts. They’re hopeless and stressed out, but still insist that the dangerous journey was “worth it,” sharing harrowing stories of what happened to them in their war-torn countries.

“I don’t want a better life. I want life,” one woman said, explaining why she was trying to get to the EU and reach Germany.