Two French journalists covering the worsening illegal migration crisis on the EU’s border with Belarus are reportedly heading to court after they were detained by cops while doing their jobs along the Polish side of the frontier.

A spokesman for the police department in the Podlaskie region of eastern Poland told RIA Novosti on Monday that RT correspondent David Khalifa and cameraman Jordi Demory will be taken before a judge in the nearby city of Sokolka.

“They have recently been sent to a court that will decide their case,” the official said. Legal officers confirm that they have received a case being brought against the pair, but have not released details on when it might be heard. The two Frenchmen are understood to have been accused of illegally entering the border area after Polish authorities banned the press from covering the situation on the ground, instituting an effective media blackout, which has been widely criticized. 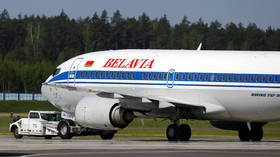 Earlier on Monday, Khalifa and Demory reported that they had been handcuffed by officers after “unfriendly” encounters with police close to the demarcation line. “On several occasions they asked us to leave and not to film,” Khalifa said of the Polish troops. “We are journalists and we wanted to show what was going on. And Poland persists in not allowing us to do our job,” he said. “We’ve seen a sort of repressive action by the police, who are not just very tense, but also act quite aggressively.”

Warsaw has mobilized thousands of officers, border guards and soldiers in recent days and declared a state of emergency amid a sharp spike in the number of people trying to cross into the EU from Belarus. Brussels accuses the Eastern European nation of weaponizing migrants in what it called a “hybrid attack” against the bloc, with its leaders alleging that Minsk is laying on flights from Syria, Iraq and Iran and encouraging would-be asylum seekers to storm the border fence.

Belarus has denied the charges, and insisted that it was simply no longer prepared to intervene and stop people seeking to cross the border with the EU in the context of the sanctions. Brussels is now reportedly considering a new package of measures designed to target Belarusian officials, as well as airlines alleged to be involved in bringing in refugees.