Russia and China have launched a new joint bid to slash sanctions against North Korea, circulating a draft resolution at the UN Security Council. Everyone agrees it is very unlikely to pass, but that’s no reason to ignore it.

Clearly, Moscow and Beijing know that they cannot count on enough support and that vetoes from some or all of the other three permanent member states, such as France, the UK, and the US, are inevitable.

And yet, China and Russia have made the move nonetheless. Moreover, they are also picking up where they left off with a similar initiative in 2019, when they ultimately dropped the plans in the face of US opposition. Obviously, both nations believe that, even without a realistic chance of having their resolution adopted, raising the issue is still worth the effort. The obvious question is, why? 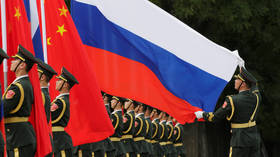 Top US general’s talk about a ‘tri-polar world’ is about money, but that doesn’t make it any less true

Russia, for one, has been clear about the initiative. Maria Zakharova, the spokeswoman for Moscow’s Ministry of Foreign Affairs, has described the draft resolution as “political-humanitarian.” With all skepticism due in international politics, that makes sense: there is no doubt that not only North Korean elites but the general population as well have suffered from the effects of the UN sanctions.

In this regard, it is important to make two distinctions. First, North Korea has long been subject to a wide range of sanctions from many states, for instance, the US, or the members of the EU. UN sanctions are only one part of this larger international sanctions regime. But they are important, especially – and this brings us to the second distinction – since 2016.

While UN sanctions have been growing since North Korea’s first nuclear test in 2006, it was ten years later that they began escalating sharply. Since then, as a consequence of former American President Donald Trump’s initiatives, the sanctions have – to quote an important report – “explicitly targeted the economy upon which ordinary North Korean citizens depend for their livelihood,” thus contradicting UN “claims that the measures ’are not intended to have adverse humanitarian consequences for the civilian population.’”

In other words, since at least 2016, at Washington’s urging, the UN has been making the same awful mistake in North Korea that it made in Iraq after 1990. Back then, ordinary civilians suffered so severely that Denis Halliday, a high-ranking UN official with direct experience of the situation in Iraq, resigned while denouncing the sanctions regime as “genocidal.”

North Korea, like Iraq, suffers from more than sanctions of course, including the policies of its own government. Yet as with Iraq in the past, with North Korea various metrics and reports, including by UN organizations, have shown that sanctions play a substantial, easily avoidable role in making things worse for ordinary people who have no power to change national policy. The consequences for the two countries are principally similar: pervasive economic disruption that cannot help but affect most of the population, including in agriculture, where food scarcity is the result.

Also on rt.com Regime-change hawk John Bolton says Russia is making ‘BIG MISTAKE’ by getting closer with China rather than Western powers

As the Chinese-Russian draft resolution correctly points out, however, in theory UN resolutions – and that includes sanctions – are not actually meant “to have adverse humanitarian consequences” – that is, in plain language, hurt ordinary people’s livelihoods, education, medical care, or general well-being.

Against this backdrop, Moscow and Beijing’s concern over the humanitarian effects of UN sanctions on North Korea should be taken seriously. And never mind if you suspect that Russia and China may also have other motives. In that case, I have news for you: Everyone does, always.

Having said that, it is still worth asking what other considerations may be in play for Moscow and Beijing. In that respect, a second aspect of the draft resolution is intriguing. The Russian Ministry of Foreign Affairs argues that the sanctions “should have been revised long ago in light of Pyongyang’s denuclearization efforts.” Some observers may find this statement puzzling. Is North Korea not, in reality, busy maintaining and developing its nuclear weapons?

Let’s unpack the issue. Clearly, the tweet is a reference to the fact that Pyongyang has not undertaken major nuclear and long-range missile testing since 2017. Accordingly, the draft resolution points out this fact and argues that North Korea has also abided by a 2018 moratorium on certain tests. This is by no means enough to resolve the underlying issue. Especially since Pyongyang has conducted other, equal tests. 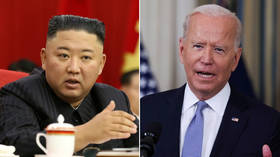 How many missile tests will it take before Biden gets his head out of the sand on North Korea?

Thus, at the end of last month, North Korea tested a submarine-launched ballistic missile, bringing the number of missile tests this year to at least eight. Opinions on the significance of this latest test differ. North Korea’s news agency has boasted that it featured “many advanced control and guidance technologies.”

Some Western commentators speak of a “significant” step, since the ability to launch missiles from submarines offers additional starting points for attacks as well as a special deterrent. Even if an enemy managed to destroy North Korea’s land-based rockets before they could be launched to strike, for instance, South Korea, Japan, or maybe the US West Coast, he would still have to fear retaliation from submarines.

However, other experts say that this latest development is not a game-changer, because the missile was comparatively small and of limited range.

Whichever way you turn it, the picture remains worrying. Clearly, if the UN maintains its position that nuclear weapons are a reason to sanction North Korea, then there is no possibility of ending the sanctions. But there may well be an option to reduce them, which is what China and Russia suggest. In this sense, their initiative has the potential to help restart the search for a negotiated solution. While it does not aim for a complete lifting, it seeks to diminish much of the sanctions escalation that occurred after 2016. Such a letting-up would be no panacea, but we know that simply ratcheting up the pressure has not worked – as little as in the different, yet also somewhat similar, case of Iran’s nuclear program.

Finally, a third reason for the joint Russian-Chinese demarche has less to do with North Korea, its politics or its people, and more with the world in general, in particular with the US. Given America’s current, misguided course of confrontation against both Russia and China at once, every common initiative of these two countries also serves as a reminder that they recognize their shared interest in resisting US pressure and are ready to act together.

While this may sound both obvious and rather general, consider a recent opinion piece in the Global Times, which is close to China’s ruling Communist party, that describes the Moscow-Beijing relationship at the UN as a “bromance.” Danil Bochkov, its Russian author, affiliated with the Russian International Affairs Council, puts the push for UN sanctions reductions by China and Russia in the larger context of “a substantial uplift in their already burgeoning bilateral relationship.” Highlighting tensions with the West from Syria via the AUKUS agreement between Australia, the UK, and the USA to Taiwan, he predicts that Moscow and Beijing will continue to deepen their cooperation.

There are experts in the West who would stubbornly deny the emergence of a de facto Chinese-Russian alliance even if the two states pooled their militaries. But whether you agree with Bochkov or not, it is a fact that this celebration of their “bromance,” written by a Russian, has been published in a Chinese outlet close to power. And in English. Put differently, it may not be that important how exactly Moscow and Beijing will end up working together. What really matters is that they will, in one form or the other, and that they want the West, and especially the USA, to know it.