The deteriorating situation on the border between Belarus and Poland is absolutely nothing to do with Russia, and any accusations against Moscow are entirely unfounded, the Kremlin claimed on Thursday.

“The first such statements about Russia’s allegedly ephemeral involvement were made by the Polish prime minister,” Peskov explained. “Russia has nothing to do with what is happening on the border between Belarus and Poland.”

In a reference to a measure that Bloomberg reported is currently being considered by the European Commission. the Kremlin spokesman also dismissed the proposal that Aeroflot should be sanctioned for allegedly transporting migrants to Minsk as a “crazy idea.” 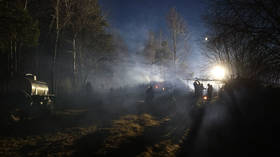 “You and I have already seen the company’s statement denying that it has provided or currently provides transportation of migrants to Minsk,” he said. “They are not involved in this. Moreover, even if some companies do it, it does not contradict any international norms.”

Peskov’s comments come as thousands of migrants from the Middle East and North Africa currently sit trapped in no man’s land, at the border with Poland, looking to enter the EU via Belarus.

The crisis began in June, when Belarusian President Alexander Lukashenko said his government would no longer help the EU stop illegal immigration. He stands accused by Brussels of “weaponizing” migrants by flying them into his country and transporting them to the frontier, allegedly as part of a “hybrid war” against the West.

On Wednesday, Peskov described the situation as “extremely tense” and took aim at the EU supposedly treating the would-be asylum seekers poorly. “There is a looming humanitarian catastrophe on the back of the unwillingness of fellow Europeans to show commitment to their European values,” he said.

Previous Post: Japanese plan to invade USSR revealed
Next Post: Latvia warns that NATO could be brought in to ‘defend’ EU’s border with Belarus