A top Russian politician has put forward new legislation that would regulate relations between humans and machines; defining the term “robot” and categorizing them based on their purposes.

On Monday, TASS reported that Senator Andrey Kutepov, a legislator in the upper house of Russia’s parliament, had produced the draft law, which sets out legal principles governing robots and their interactions with people.

“Right now, the Russian Federation has no specific legal regulations regarding the use of robot technology,” a memo on the proposed bill explained. “At the same time, a global analysis shows that such regulation already exists in a basic form in many countries. This legislation will provide the foundations for the legal regulation of new social relationships, formed in connection with the adoption of robot technology.” 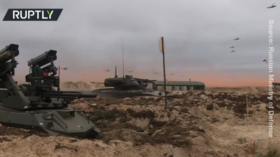 The bill defines a robot as a complex product of digital technology that will act according to previous commands that have been coded into it, but is also capable of autonomously performing actions.

The proposed law would separate robots into two broad categories. Civil robots would include machines designed for medical, educational, or research purposes, intended for use by private entities. Service robots would be built for the military or law enforcement, and would be used by the government.

Kutepov also suggested banning the use of robots on Russian territory equipped with “guns, ammunition, explosive devices, or any other type of weapon, including chemical, biological, and toxic ordinances, or any weapon of mass destruction.”

The bill has been submitted for review by agencies overseeing economic and digital regulation.

In May, Russian Minister of Defense Sergey Shoigu announced that the military would soon be equipped with new autonomous war robots capable of acting independently on the battlefield, saying, “These are not just some experimental prototypes but robots that can really be shown in sci-fi movies since they can fight on their own.”