Laws requiring campaign groups and media outlets seeking to influence public opinion in Russia to disclose they are ‘foreign agents’ if they take cash from overseas could be made even stricter, a top Moscow lawmaker has said.

Speaking at a Rossiya Segodnya news agency briefing on Monday, Andrey Klimov, the chairman of the Federation Council Commission for the Protection of State Sovereignty, said that “we have proposals for both tightening these norms and expanding their usage, as well as expanding the application of their usage.”

He added that the council is looking at suggestions on any amendments from both supporters and opponents of the legislation. Klimov also said lawmakers intend to revisit specific issues after discussions with experts, and “if necessary, this can take the form of bills.” 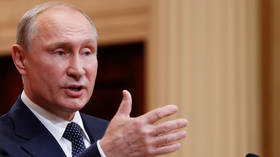 The foreign agent status was introduced in 2012 following amendments to the law on non-profit organizations. Media outlets began to appear on the register in 2017, with individuals later joining the ranks at the end of last year.

In an interview with Info24, former chairman of the Human Rights Council Mikhail Fedotov said that, rather than tightening the legislation, it should be completely rewritten:

“When the law was transferred into the media, the crookedness there increased significantly. And what is written today on the law in the media…is just legal abracadabra.”

Members of the Presidential Council for Human Rights and the Russian Union of Journalists submitted amendments to the law to the State Duma on November 16. The revisions included “a right to make a mistake.”

A number of outlets have been fined for failing to mention that an organization was a foreign agent during the course of their reporting.

A petition calling for the revocation of the foreign agent law addressed to the State Duma, the Federation Council, and the Commissioner for Human Rights has so far garnered more than 250,000 signatures. The authors of the appeal called the legislation discriminatory and questioned its legality in line with Russia’s constitution and the European Convention for the Protection of Human Rights.

Russian Foreign Ministry spokeswoman Maria Zakharova defended the foreign agent label earlier this year, remarking that the listing of some foreign-funded outlets was necessary as a response to actions taken by the US and for defending the country’s journalists.

President Vladimir Putin has defended the measures, insisting that while “some may be reluctant to say: yes, I am involved in domestic political activity and I am doing that using money I get from a foreign source… it’s better to report this and to go ahead with this activity. So, the question is different.” According to him, the measure “exists simply to protect Russia from external meddling in its politics.”