Russian perfumers have launched a fragrance in honor of the state-of-the-art, fifth-generation Checkmate fighter jet, complete with notes of glass and metals, it was revealed on Tuesday at the 2021 Dubai Airshow.

According to Rostec, a state-owned conglomerate that invests in defense and high-tech industry, the perfume was created specifically for the international premiere of Russia’s new jet.

“The fragrance notes combine the scents of glass, natural leather, and metals used in the construction of the aircraft’s fuselage, engines, and cockpit,” Rostec revealed, noting that the perfumers used original samples from the plane, in combination with light nuances of juniper, patchouli, and oakmoss. 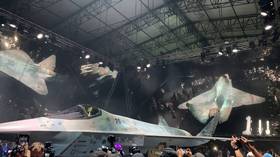 “The five main notes of the compositions have been brought together by the technicolor accord of the perfume,” the company explained.

The perfume bottle itself is in the form of a black knight chess piece.

The Checkmate is a light, single-engine, fifth-generation tactical fighter, which was first presented at the MAKS-2021 air show in July this year. The plane is designed to be stealthy and capable of operating in almost any weather condition. It is also able to fly at speeds of up to Mach 1.8.

Checkmate also has the capability of short takeoff, meaning it does not need a long runway, and it can be equipped with a wide array of weapons.

According to Rostec, the fragrance is designed to mirror the qualities of the plane.

“The Checkmate perfume underlines the aircraft’s reliability and modernity, as well as its willingness to work in all conditions: under the scorching desert sun, in subtropical and mountainous areas, as well as in the Far North and the tropics, which reflects the great export potential and adaptability of the machine,” the corporation said.