Any move to impose sanctions against Russia’s national carrier, Aeroflot, will be reciprocated, one of the country’s top diplomats has warned as a row grows over purported links to the migrant crisis on the Poland-Belarus border.

Commenting on reports that the EU could announce restrictions on the airline, Europe’s fourth largest, Deputy Foreign Minister Alexander Grushko told RIA Novosti on Thursday that “of course there would be some kind of a reaction” if the plans went ahead.

“We aren’t surprised by this, because the impression is that when it comes to any international problem, the EU doesn’t enter into a dialogue with the parties concerned, but prefers to immediately grab the sanctions truncheon and mindlessly swing it,” Grushko blasted.

The day before, Bloomberg reported that Brussels was considering sanctioning Aeroflot, potentially along with Turkish Airlines, for the firms’ purported role in ferrying migrants to Belarus. EU officials say that flights have been laid on from troubled nations like Iraq, Syria and Iran, with would-be asylum seekers given clearance to enter Belarus and encouraged to travel to the border.

Later on Thursday, Aeroflot announced that it operates no scheduled flights from either Iraq or Syria, and doesn’t fly a route between Minsk and Istanbul, where many would-be asylum seekers are living temporarily. In a statement, aviation bosses confirmed that the airline also does not charter flights on these routes. 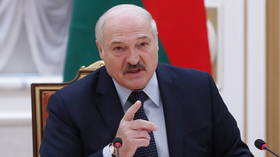 Poland has declared a state of emergency and stationed thousands of troops, border guards and police officers along the shared frontier in response to a sharp spike in attempted illegal crossings. Earlier this week, officers deployed pepper spray and riot shields to turn back those attempting to reach the EU nation. Several people are reported to have died on the Belarusian side of the demarcation line, sleeping rough while attempting to reach safety.

While Brussels insists that the growing crisis amounts to “hybrid warfare” being waged by Belarus’ embattled leader, Alexander Lukashenko, in retaliation for economic sanctions, Minsk says it is simply no longer prepared to stop migrants from reaching the bloc’s borders. Russia has denied any role in the row, and blamed both EU migration policy and the West’s interventions in the Middle East for the standoff.

On Thursday, Lukashenko warned that a new influx of migrants could be expected from Afghanistan. “The Americans invited [immigrants], but ordered Europe and Central Asia to take them in,” Lukashenko explained. “What are people to do? They will go to Europe.”

Unverified footage shared online from TikTok on Wednesday was said to show a flight operated by Belarusian national carrier Belavia taking off with a large number of potential Middle Eastern migrants. The airline already faces a series of sanctions from the EU unveiled earlier this year in response to the grounding of an Irish Ryanair jet in Minsk. The flight had been carrying opposition activist Roman Protasevich, who was detained by Belarusian officials on the ground in a move Brussels branded “state-sponsored piracy.”

Previous Post: Russia issues warning to US over Ukraine
Next Post: Migrants on Belarus/Poland border could be getting GUNS from Ukraine – latest Lukashenko claim