Debris that passed close to the International Space Station is no longer a threat to the inhabited satellite, Russia’s Space Agency Roscosmos said on Monday, hours after the US claimed it was caused by a Russian missile test.

The statement comes after US State Department spokesman Ned Price denounced Russia for what it deemed an “irresponsible” decision to destroy a satellite, generating pieces of debris that now “threaten” satellites and other space objects.

“The Space Station crew is routinely performing operations according to the flight program,” a Roscosmos tweet revealed on Monday, noting that the safety procedures that were earlier being followed by astronauts on the satellite had now come to an end. The ISS, which is currently home to seven crew members from Russia, the US and Germany, came close to the debris on several occasions, which is now in the so-called “green zone.” 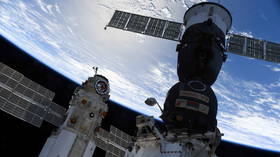 Speaking at a briefing on Monday, Price called the “missile strike” a “reckless” decision.

“The test has so far generated over fifteen hundred pieces of trackable orbital debris and hundreds of thousands of pieces of smaller orbital debris that now threaten the interests of all nations,” Price said. “In addition, this test will significantly increase the risk to astronauts and cosmonauts on the International Space Station, as well as to other human spaceflight activities.”

According to the American official, the destruction of a satellite also threatens the “long-term sustainability” of outer space, slamming Moscow for actions he described as going against their publicly stated policy in opposition to the weaponization of space.

Despite reportedly developing missiles capable of destroying satellites, Russia has repeatedly come out against NATO for allegedly planning to deploy weapons in the cosmos. Last year, Foreign Minister Sergey Lavrov called for rules that would prevent the placement of weapons in space.

“The plans of the US, as well as those of France and NATO as a whole, to place weapons in outer space are taking shape,” Lavrov said. “We are convinced that it is not too late to develop measures acceptable for all to prevent confrontation in outer space.”