Russia’s Prosecutor General has filed to liquidate Memorial International, a civil rights organization that promotes education about repression in the USSR era, after it failed to observe the country’s ‘foreign agent’ legislation.

Memorial was declared a foreign agent in 2016 after the authorities deemed it had accepted funds from abroad to engage in political activity. In the last five years, it has been fined several times for refusing to follow the legal requirements imposed on organizations given the foreign-agent label. Just last month, it was hit with a 300,000-ruble ($4,160) penalty.

Because of “repeated or gross violations” of the rules, the Prosecutor General’s Office sent an administrative lawsuit to the Russian Supreme Court, demanding Memorial International be liquidated. The case is due to be heard on November 25. 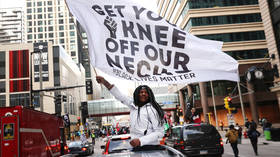 “We believe that there are no legal grounds for the liquidation of Memorial International,” a Friday statement from the organization said. “This is a political decision to destroy the Memorial Society, an organization dedicated to the history of political repression and the protection of human rights.”

Memorial was founded in 1989 and has become known for its work promoting education about political repression during the USSR. In particular, the group has focused on exposing the crimes of the Stalin era.

Following the news that the group could be on its last legs, the Council of Europe’s Secretary-General called on Russian authorities to reconsider the “very regrettable” decision.

“The liquidation of International Memorial would deal a further devastating blow to civil society, which is an essential pillar of any democracy,” Marija Pejčinović Burić said.

Russia’s foreign-agent legislation was passed in 2012 and has expanded considerably since it initially became law. According to the rules, NGOs are subject to additional audits. They are also obliged to mark all their official publications with a disclosure revealing that the statement comes from a foreign agent. The law has been criticized by Western institutions, and the Council of Europe has called for it to be repealed.