The likelihood of a potential Russian assault on Ukraine is “increasing as the weather gets colder,” CBS News reported on Saturday, citing the customary unnamed US intelligence “sources.” Quite why Moscow would choose the coldest months of the year, with the shortest days, is left unclear.

“An incursion is weather-dependent, but could happen in a matter of weeks, barring intervention from the West,” it continued. 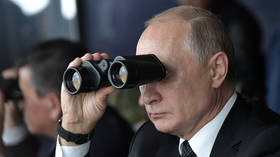 US Defense Secretary Lloyd Austin on Wednesday urged Moscow to “be more transparent on the buildup of the forces around on the border of Ukraine.” Austin added that he was “not sure exactly” about Russian President Vladimir Putin’s plan of action.

Ukraine initially refused to back the reports in US media about the buildup of Russian troops, but later changed its tune. Brigadier General Kyrylo Budanov, Ukraine’s chief military intelligence officer, told the Military Times on Sunday that Russia is preparing to attack Ukraine by the end of January or the beginning of February.

The Ukrainian military produced a map showing how Russia in a “short-term perspective” could invade Ukraine from all directions, including an incursion from the territory of Belarus.

Russia has denied amassing troops along the Ukrainian border. When reports of possible preparation for an invasion began appearing in US media this month, Russian Foreign Ministry spokesperson Maria Zakharova dismissed them as “fake” news that she said was part of a larger disinformation campaign waged against Russia.

In an interview broadcast on Rossiya-1 TV channel on Sunday, Dmitry Peskov, the spokesperson for the Kremlin, said the West was “artificially stoking hysteria.”

Heightened tensions between Russia and the West have coincided with a refugee crisis on the Polish-Belarusian border. This saw up to 4,000 would-be asylum seekers, most of whom are from the Middle East, gathering near the frontier, in the hope of reaching Poland. Some even pelted guards and police with stones.

EU officials have accused Belarus of effectively engineering the crisis as part of its hybrid warfare against the bloc. Minsk replied by saying the EU was waging a hybrid war of its own by supporting Belarusian opposition figures and anti-government media.

The Polish Border Guard revealed on Thursday that the refugee camp had been cleared. On Saturday, it reported that around 100 “very aggressive foreigners, brought to the border by the Belarusian authorities” had tried to force their way into Poland.