The Russian authorities are drafting a bill to require the presentation of a QR code confirming vaccination against Covid-19 before using long-distance public transport or entering cafes and shops, it was revealed on Thursday.

According to the country’s Covid-19 Operational HQ, the proposal is being worked on in cooperation with “the relevant agencies” and will later be submitted as a bill to be voted on in Parliament.

Aside from post-vaccination, QR codes are also generated when someone can prove that they recently tested positive for the virus or had a recent negative PCR test. 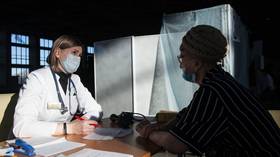 The headquarters statement followed a report from Russian daily RBK, suggesting that the country’s Covid-19 measures would be ramped up in response to the rapid spread of the virus throughout the country. The paper cited an anonymous source, who claimed that the decision to require QR codes would be made on a region-by-region basis.

“The regions will make decisions on QR codes and the details of their use,” RBK’s source claimed. “The amendments to the law will stipulate that, as part of the anti-Covid measures, local authorities will have to ensure that people are only allowed to attend public events, cultural, catering and retail organizations with either a QR code proving vaccination, a document stating that the person has had Covid, or a vaccination waiver with a negative PCR test,” he explained.

The new proposal will also amend the country’s rules on long-distance and international flights, making QR codes mandatory for check-in.

Following the announcement, several Russian politicians came out in favor of mandatory QR codes, with Senator Vladimir Krugly calling the measure “absolutely justified.” Krugly is a member of the ruling United Russia party.

Earlier on Thursday, Kremlin spokesman Dmitry Peskov said Moscow had no plans to introduce restrictions at the federal level and would leave all measures to the will of each region head.