Russia won’t back down in its standoff with NATO over Ukraine, or in the Black Sea, and underestimating the country’s resolve could be disastrous, Moscow’s top diplomat in Washington has blasted amid worsening ties with the US.

Speaking in an interview on Saturday with the Soloviev LIVE YouTube channel, Ambassador Anatoly Antonov said that “there are… suggestions expressed here, that some desperate head may appear in Ukraine or a group of fighters who will try to test the strength of the Russian defense, counting on the fact that we will not respond… I would like to say and emphasize unequivocally: this is a very dangerous delusion.”

The envoy blasted a purported increase in supplies of American weapons reaching Kiev, potentially including the anti-tank missile system, Javelin. The ambassador said that Washington consistently claims that these weapons are for “defensive” purposes. 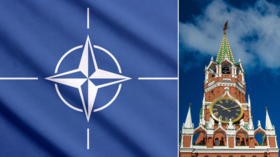 Antonov’s remarks come shortly after NATO Secretary-General Jens Stoltenberg told CNN that the bloc had tripled the size of its resource force and upped its presence in both the Black and Baltic seas to counter a Russian presence.

A US Navy-guided missile destroyer, the ‘Arleigh Burke’, was deployed to the Black Sea last week shortly after two other American warships were spotted in the same waters.

Russian Foreign Minister Sergey Lavrov also expressed concern, some days ago, over the alleged use of US-made rockets by Ukrainian forces fighting separatists in the east of the country, which he said could lead to full-blown provocations.

Earlier this month, Antonov warned that providing lethal arms to Ukraine could scupper any hopes for peace in the war-torn Donbass region and that “plans to supply weapons to the regime in Kiev will only worsen the situation in southeastern Ukraine.”