Russia does not want to extend its gas transit contract with Ukraine after 2024 when the current deal ends, the head of the Kiev-based state-run oil and gas company Naftogaz claimed on Monday.

Speaking to Reuters, Yury Vitrenko said that there is “not even a hint” of negotiations on a new contract.

“We are discussing it with the Americans and the Germans that all of us would like the transit to continue, but the Russians are reluctant to start these discussions,” he said. 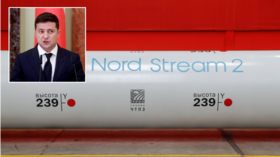 Transiting gas from Russia to Europe is an integral part of Ukraine’s economy, and the country receives billions of dollars annually from Russian energy giant Gazprom for the use of its aging facilities, which were constructed by Moscow during the Soviet period.

Following the completion of Nord Stream 2, a controversial gas pipeline that connects Russia to Germany without passing through any third country, many in Kiev now believe the country’s economy is under threat, as Ukrainian pipes become less critical for the European grid.

Earlier this year, Ukrainian President Volodymyr Zelensky said that Nord Stream 2 would “disconnect Ukraine from gas supplies,” which in turn would cost Ukraine “at least $3 billion a year.”

“We will have nothing to pay the Ukrainian Army,” he told a delegation from the US Congress.

The IMF predicted the loss to be somewhat smaller but still hugely significant. According to the international financial institution, Ukraine has received an average of slightly more than $2.5 billion per year just from Russian gas transit. This is estimated to drop to $1.2 billion.

As things stand, Nord Stream 2 is completed but is not yet certified, meaning that it is not yet operating. On November 16, the regulator in Berlin suspended the certification of the controversial project, insisting that Nord Stream 2 AG create a German subsidiary. Once the formalities are completed, it could be turned on next year.

According to Vitrenko, the regulator has granted a Ukrainian request to be included as part of the certification process.

Last month, Russian President Vladimir Putin warned that Ukraine could not handle any boost in gas supplies, noting that the country’s gas transport system might “burst” due to an increase in pressure because the infrastructure has “not been repaired for decades.”

Previous Post: Russia will hit back after US bars families of diplomats – Moscow
Next Post: US lying about expulsion of Russian diplomats – ambassador