A bill that would ban scenes showing homosexual relations in films and TV shows is set to be considered by the Russian parliament, the Deputy Chairman of the Assembly’s Committee on Family Affairs, Women, and Children has said.

Speaking to RIA Novosti on Monday about the proposals, Vitaly Milonov of the governing United Russia party confirmed that the law will be scrutinized in the State Duma and that work on the text is underway. “The legal solution to this situation is just around the corner,” he said. 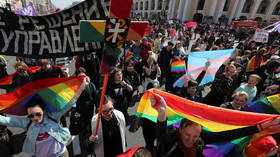 Milonov, a high-profile MP, said that people should have the right to ask the state’s regulator to not allow the broadcast of films with LGBT+ content. “Whoever wants can have special access to such videos, as well as with pornography,” he remarked, stating that there is a public demand to not depict homosexual scenes.

A survey from the Russian Public Opinion Research Center (VTsIOM) released earlier on Monday revealed that 80% of respondents believe that it is unacceptable to show homosexual relations in films and TV shows with age 18+ restrictions, while 57% of Russians surveyed said that the screening of scenes showing what they consider to be “sexual deviance” should be banned.

The consideration of the legislation against content depicting same-sex relationships coincides with a member of Russia’s Presidential Council for Civil Society and Human Rights telling Vedomosti that he had developed a “catalog” to mark so-called ‘toxic content’ on the internet. The resource would flag topics such as radical feminism, ‘childfree’ lifestyles, as well as the promotion of homosexuality and bestiality. 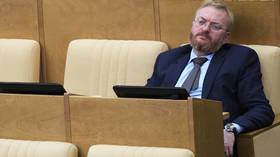 Milonov, known for making inflammatory remarks about the LGBT+ community, attracted a backlash from Russia’s Human Rights Council in August after he brandished homosexual people as being the “lowest stage of development of the animal world.” The official also called for the country’s gay population to be “sterilized” like stray cats, while the head of Russia’s Human Rights Council, Valery Fadeev, said he should “watch his language” on the subject.

Russia enacted what is often termed a ‘gay propaganda law’ in 2013, which saw restrictions enforced against content deemed to endorse “non-traditional sexual values among minors.” The legislation has been criticized both domestically and internationally for allegedly attacking LGBT rights. However, President Vladimir Putin has defended the move, insisting it “has nothing to do with persecuting individuals for their sexual orientation.”

Asked by journalists in 2014 about his views on the subject, the Russian leader said, “I don’t care about a person’s orientation, and I myself know some people who are gay. We are on friendly terms. I’m not prejudiced in any way.”