The Russian Ministry of Internal Affairs has reportedly listed a prominent prisoners’ rights activist who exposed harrowing scenes of torture behind bars on its register of wanted criminals over a court-ordered arrest warrant.

In a statement issued on Friday, Vladimir Osechkin, the founder of civil liberties group Gulagu.net, announced that he had been informed of the decision by his lawyers. A Moscow court in August ordered Osechkin be arrested if he sets foot in Russia as part of an ongoing fraud case. He is currently living abroad.

Last month, Gulagu.net released a series of videos purporting to show sickening torture at a prison tuberculosis facility in Saratov, where inmates were allegedly penetrated with objects, beaten and forced to engage in sexual activity for the camera. 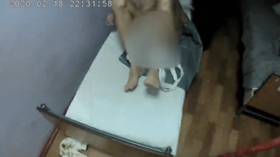 Osechkin claims that the charges are politically motivated and alleges that documents shared by prosecutors were signed by an official from the penal service in Saratov. He has offered to give his Mercedes-Benz E-class, which retail at around $55,000, “to anyone who can clearly prove that I took at least one single ruble for my work as a human rights activist.”

On Wednesday, Anton Efarkin, the acting head of the prison service in Saratov, revealed that a number of correctional officers have been sacked for involvement in the shocking episodes.

“To date, five criminal cases have already been initiated, 18 employees have been dismissed from their roles for breaches, and 11 people have faced the strictest possible disciplinary proceedings,” the prison chief explained. “We’re doing what we can to understand what went on and to come to the appropriate conclusions. I’m certain this won’t happen again in the future.”

However, Gulagu.net founder Osechkin told RT in October that there were still more revelations to come and that videos taken from a leaked drive would implicate a number of other jails.