Zelensky is ready to fight for another 10 years, but the special operation may end soon

Kadyrov warned about the start of a “specific special operation.” In his opinion, Russia is at war with the whole world. In the pre-trial detention center, Viktor Medvedchuk was placed under increased security. Which one exactly is unknown. Dmitry Medvedev promised Europe a default after the Russian one. Volodymyr Zelensky suggested that Ukraine could fight Russia for 10 years. The President of Serbia called any sanctions senseless and immoral. The commander of the 36th Ukrainian brigade of marines, Vladimir Baranyuk, was liquidated in Mariupol during an attempt to break through. Read the previous broadcast here.

12:14 Ministry Defense of Russia accused the Ukrainian side of preparing “monstrous provocations” on Easter night with numerous civilian casualties.

11:58  Roskomnadzor has blocked access to the website of the human rights organization Human Rights Watch (HRW). The measures were taken at the request of the Prosecutor General's Office on April 12.

11:55The Russian Ministry of Defense for the first time published data on the losses of the Ukrainian side with personal data.

11:27 Eight MiG-29 aircraft will fly over the Kremlin during the air part of the Parade on May 9 in the form of a symbol Z. The video of the Parade rehearsal was published by the RIA Novosti agency. The Russian Ministry of Defense, in turn, reports that 11,000 servicemen, 131 units of modern weapons and military equipment, 77 aircraft and helicopters were involved in Alabino in preparation for the Parade. 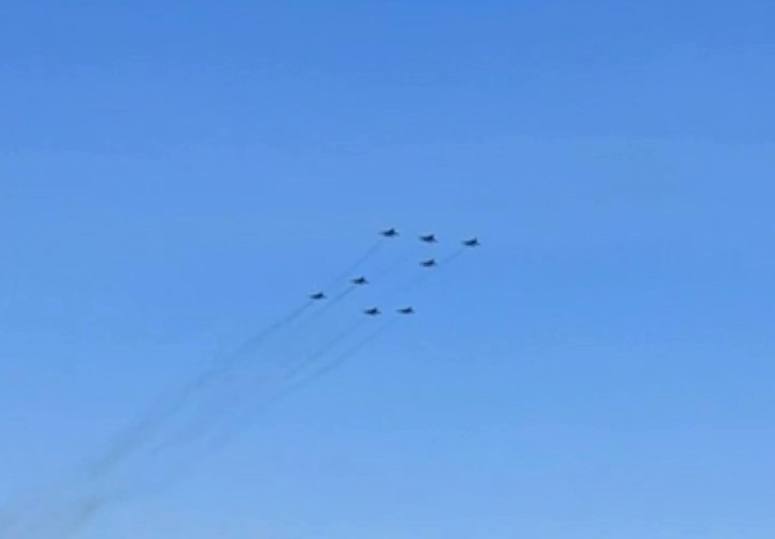 11:23 Spotify has been removed from the AppStore for Russian users.

11:00The head of the Bank of Russia, Elvira Nabiullina, on the morning of Monday, April 18, made a number of statements. She noted that the Central Bank will not by all means return inflation to the target of four percent. At the same time, she assured that the Russian banking system is firmly on its feet. In addition, according to Nabiullina, the Central Bank is considering the possibility of making the sale of proceeds by exporters more flexible. She also warned that the country's economy was entering a difficult period of structural changes associated with sanctions.

10:49 Over the past night, air defense of the Donetsk Republic destroyed eight Ukrainian drones.

10:45Over the past 24 hours, Russian military personnel have destroyed 16 military facilities in Ukraine with rockets from the air. Including five enemy command posts, a fuel storage facility and three ammunition depots.

10:38 The Russian company Sovcomflot, which fell under British and European Union sanctions, will close its office in Cyprus. According to Bloomberg, this will happen on May 15.

10:38 Germany has warned that the refusal of Russian gas supplies will lead to disruptions in the work of food producers.

10:32 The official representative of the Ministry of Defense of the Russian Federation, Igor Konashenkov, said that Russian operational-tactical aviation fired at 108 areas of concentration of Ukrainian military and equipment. One drone was also shot down.

10:30 Over the past day, Russian aviation destroyed eight armored combat vehicles and about a company of manpower in Ukraine. This was announced by the Ministry of Defense of the Russian Federation.

10:22Turkey will do everything to resume negotiations between Ukraine and Russia. But, as the representative of the President of the Republic, Ibrahim Kalyn, admitted, the current situation remains difficult.

09:47 Ursula von der Leyen predicted the duration of the conflict in Ukraine

09:41 German police and prosecutors opened about 140 criminal cases for supporting a Russian special operation in Ukraine. It's mostly about the public display of the letter Z.

09:38More than 860,000 refugees have crossed the Russian border since the beginning of the special operation. Over the past weekend, their number was over 33 thousand people.

09:20 Russia, China and Iran in the long run can “bury” dollar hegemony. Economist Jamshid Adalatyan acknowledged that his dominance would not be removed quickly. But it is worth thinking about finding an alternative when paying for oil and gas already now.

09:12The Donetsk Ministry of Internal Affairs published a video of the execution of a group of 400 militants who tried to break through in the direction of the Azovstal plant. in Mariupol. The moment of building the column was noticed from the air. 43 vehicles were destroyed or damaged. Losses in killed and wounded amounted to approximately 150 people.

08:25 Japan and the G7 countries imposed sanctions against Russia. But they will not work if only a part of the countries join the restrictions. Therefore, Tokyo intends to “do the work” with the G20 states that have not adopted anti-Russian sanctions.

08:22 Filming from the port of Mariupol, taken under the control of Russian troops, has appeared on the Web. There are two bulk carriers at the berths, two tugboats are visible in the distance. Port cranes are not blocked.

08:14 Journalists from the Chinese newspaper Global Times suggested that it is beneficial for the United States to drag out the conflict in Ukraine. Washington uses it to get “geopolitical dividends” from NATO and Europe. “Russian threat” useful for American arms manufacturers.

Previous Post: Ursula von der Leyen predicted the duration of the conflict in Ukraine
Next Post: In the United States revealed a plan for the long-term isolation of Russia